Oddly enough, a new-client call from Bahrain put me on notice… and  I was unprepared!

I hadn’t used my Source-Connect in months and months.  More importantly, I hadn’t tried connecting to ANYONE on SourceConnect (SC) since I put my new computer in my studio earlier this year.  Sure, SC was installed, but not configured on that new computer.  ‘Not good enough, as I soon found out.

I began using Source-Connect in 2008.  Honestly, back then, I found it problematic.  There were all these issues of port forwarding, and static IP configurations.  You could use it as a VST plug-in from your DAW, or use their stand-alone Source-Elements Desktop interface…none of which seemed easy to install.

On my old computer, though, I had SC up and running on both XP and Win7.  But when my new client called from Bahrain,  I had nothing.  Luckily, he was understanding, and I was able to send him a recording after he listened in on a Skype phone patch.

That’s embarrassing, though.  Ya know?  SC is an investment, and it SHOULD WORK!

I began to dive back into the world of Source-Elements YEARS after I had first diddled with it.

I’m happy to report that SC is doing well, their support is fantastic, and they have new software for Windows users that  — while in Beta — is robust, easy to configure, and ….WORKS!

First of all, I noticed that SC was touting a new standalone Beta 3,7 that George Whittam said was pretty slick.  George is the authority.  If he says so, it must BE so.

Unfortunately, though, you have to have an active support contract to be considered as a Beta tester for 3.7  Luckily, I found that my lapsed support contract could be renewed for a reasonable quarterly investment ($29). Done.

I began engaging their support person – Rebekah – who, it turns out, operates from an office in Europe, and is amazingly responsive by email.  Not only responsive, but incredibly helpful, knowledgeable, and…well….supportive. 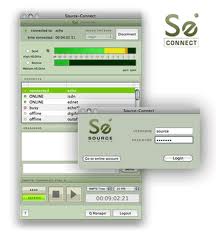 There was a bit of a hang-up getting the iLok anti-piracy dongle to recognize my new licenses (if that sounds confusing or complicated…it is), but once I dealt with that, the new 3.7 Beta was smokin’.

I will say that I find the Source-Elements.com website to be confusing.  You can easily find yourself going in circles looking for answers, downloads, and FAQ’s.  It’s all there, just not intuitively easy to find.  This is why Rebekah is so helpful.  She just sends you the files you need to install…instead of having to search for them.

As of right now, then, I’m up and running with the new standalone Source-Connect 3.7 for Win7 ( the MAC version is NOT in Beta, BTW).  SC has granted me a automatically-renewing trial run on the Beta until the official release, probably in a couple of months.  At that time, it will cost me $267 to upgrade from my current SC 3.0 Standard install.

Remember SC has a head-start on all the other contenders when it comes to ISDN alternatives.  Not that it’s all that much better, but in the world of stubborn studio heads unwilling to switch from the tried-and-true ISDN, SC has had at least a little more acceptance than the short list of other broadband options:
1) ConnectionOpen
2) SoundStreak
3) Skype (?)