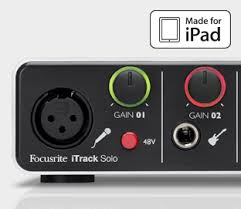 Just ricocheting a post from Alan Curry of PieHole that I thought had merit in case you didn’t see it.

Alan hails the new FocusRite iTrack Solo with the following comment on my Voice-Over Friends FaceBook Group: “…it’s never going to replace a properly equipped studio, nevertheless I’m impressed with it so far and can’t really fault it as a portable or temporary solution. Indeed, for certain projects like web video, on-hold & IVR, I’d even go so far as to deem it perfectly acceptable…”

Banking on the legendary FocusRite reputation, and selling at a reasonable $159 at online shops like Sweetwater, the FocusRite iTrack Solo is touted as being compatible with Mac, PC, iPhone and iPad.

From the website:  “…A supplied cable connects iTrack Solo to the iPad, and it is powered by the included USB cable that delivers the power necessary to run the iTrack’s high-specification components. If you are using iTrack Solo with a Mac or PC you don’t need to connect it to the mains, your computer will supply enough power via the USB cable….”