They Beat Me To It! 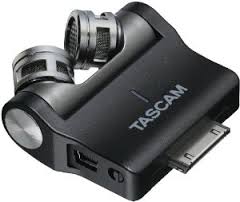 Mehmet Onur  has often come to the States for VO conferences.  He’s a prolific Turkish voice actor, TV Producer, and all-around talent.  My pathway to Mehmet is Andy Boyns, a British Voice Talent who lives and works in Istanbul (known to many of you).

Mehmet recently posted a sound-comparison of the new Tascam iM2X…. the newest version of the Tascam iM2 that I reviewed last year (one of my most popular blogs evar).

Here is the link for Mehmet’s AudioBoo audio comparison of the Tascam iM2x vs. the native iPhone 5 mic:  http://audioboo.fm/boos/1279412-tascam-im2x-vs-iphone5

What I REALLY want to see is a comparison with the Tascam iM2x and the RØDE iXY, that I mentioned in a blog last week.  both have the unique X/Y mic configuration, and both fit onto the iPhone 5.  Interestingly, the TascamiM2x and RØDE iXY shown here have the 30-pin connector standard on all iPhones EXCEPT the iPhone 5.  Do the two new mics have the iPhone5 “Lightning” connector version too?  The RØDE iXY touts the fact that it works with the iPhone5, so do they have converter plugs, or native Lightning models???   Curios nerds wanna know!

At any rate, I don’t plan to rush out and buy both of them just for the evaluation (I know, I know…unlike me), but I’ll bet someone will…and when they do…I’ll post it here.

One quick “gimme” here (unrelated),  Google now is out with a new app called “KEEP”.  It’s being reviewed as a possible alternative to Evernote (or Catch, or SpringPad).  It’s available on the Google play store for all Android devices.  Side note:  naysayers are now bad-mouthing ANY new program Google comes up with after the tech-giant announced it’s withdrawing support for Google Reader.  Their logic:  why take KEEP under consideration if Google is just going to continue to banish established products that don’t fit their new “cool factor” criteria?