“In a World” Flic Gets Distribution Deal 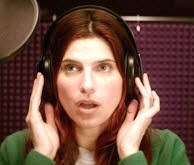 If you were a plumber, wouldn’t you be jazzed that a quality Hollywood movie about your profession is getting rave reviews?

Cops and doctors have been enjoying that film bounty for years (and Hobbits).

But how ’bout a movie dealing with the profession of voice-acting?

You’ve probably heard that Lake Bell’s movie “In A World” won raves at the Sundance Film Festival.  Everybody’s favorite Promo voice actor Joe Cipriano (who is in the movie) has been promoting the flic, and even attended a premiere in San Fran not too long ago.

Now the movie has been (as they say) “picked up” by Roadside Attractions for the distribution rights.  That’s no small feat, and means it’s coming soon to a small (probably independent) theatre near you soon…or maybe one of the big movie chains.  Who knows?

I just know I can’t wait to see it…’cause it’s supposed to be hilarious…and of course it’s gotta be full of inside jokes only WE will get, right?

More info on this development in links below, and watch for an interview I’m scheduled to do with Lake Bell for VoiceOverXtra soon!