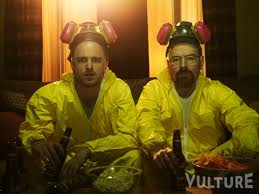 You haven’t seen the Emmy-award winning show?  OK, sign-on to Netflix and start watching.  The first four seasons are available (no commercials!)  Most who have started…can’t stop watching.

For the purposes of this blog, I’m going to assume you’ve watched, or are at least familiar with the theme of a HS Chemistry teacher who spirals ever downward into the culture of crime when he decides to “cook” meth as a means of offsetting his cancer/medical bills and provide for his family.

The show has a particularly insidious way of prompting you to ask yourself the question how you would act/react if you were in the shoes of the main character: Walter White.

Having worked my way through the first 3 seasons, and edging, now, into the fourth; I offer the following humble observations-of-life the screenwriters seem to be underscoring, and how they can work in your favor as you develop your voice-over business:

1)  Coincidence, random relations, and stand-alone events in a vacuum are an illusion.  EVERYTHING is relational, dependent, cause-and-effect, and results in consequences.  Whether or not this plot-line is a true law of the universe I can’t say definitevely, but I suspect it is.  Too often, I’ve found meaningful or surprising outcomes from seemingly chance co-ocurring events or relations.  I understand the value of risk in success, but if you can somehow NOT burn bridges, not insult people, and not blow opportunities while you take risks, that might be valuable advice.
BrBa example: Walter does all he can to separate his drug dealings from his private life, but conspiring forces result in his brother-in-law being shot by revenge-seeking cartel hit-men originally targeting Walter.
VO Scenario:   The up-and-coming newbie you graciously mentored, then forgot, returns years later, happy to connect you to a client seeking just the voice your “newbie” knows YOU possess.

2) Murphy is alive and well. (if something CAN go wrong, it WILL).  This is not an infallible law, but so likely that you can’t afford to ignore it.  Most of us are so used to this principle’s presence in our lives, we almost automatically adjust for it. Don’t get lazy, complacent, or stupid, ’cause it will rise up and smack you in the back of the head.
BrBA example:   The father of Jesse’s girlfriend becomes so heart-sick over her death, that his inattentive oversight as an air traffic controller leads to an in-flight collision of two jetliners, and the death of hundreds.
VO Scenario:   Your over-confidence in the trustworthiness of your computer’s Hard Drive helps you turn a blind eye to the subtle signs of imminent failure, and one day it Just. Won’t. Start. You lose buckets of digital data.

3)  The more you lie, the more you have to lie.  Sometimes the truth hurts, but that’s pretty much a one-time discomfort, and you’ll be surprised how often others are grateful for the honesty. I can’t say I’ve never lied, but I can say they tend to persist and come back to haunt you in ways that start to feel like a pit bull hanging onto your pants cuff.  We all know honesty is the best way to run a successful voice-over business. Now go forth and practice that.  Even when it’s uncomfortable.
BrBA example: Long-suffering wife Skylar White decides to lie to herself (for a while) and all the other family members to protect Walter’s reputation.  The lies make her a complicit partner in his life of crime.
VO Scenario: You tell a client you are unavailable for an urgent deadline.  The party you go to instead ends up being “documented” on several friends’ FaceBook page.  Client notices, loses respect, and you lose work.

4)  Create a product so good, people will do anything to get it.   Quality sets its own price.  So does uniqueness.  Together, they’re unbeatable…in a sphere all their own.  Not that there’s anything wrong with consistently good, or dependable, or plodding reliability, but to hit the mother-lode of realized dreams, your VO product needs to be so uniquely, marketably, platinum-grade YOU, that no one comes close, and everyone wants it.
BrBa example:  99.1% pure Meth was SO MUCH better than even the 97%-grade that Gale could cook, that it led to several people’s death, and vaulted Walter White to millionaire status in a matter of months.
VO Scenario:  Avalon, Wolfson, Neumann, Cipriano, FocusRite, LaFontaine, Sennheiser, Fraley, iPad, Whittam.  Need I say more?

5)  The Pontiac Aztec was unappreciated.  This boxy, short-lived, and largely villified GM offering suffered car-critic and owner-driven ridicule for several years and then disappeared.  Never mind the hundreds of millions that went into its concept, marketing niche research, design, and finally it’s production.  The Pontiac Aztec suffered a crisis of conscience and lack of perceived viability that finally prompted it’s quiet demise.  What a shame.
BrBa example:  Walter’s tan Pontiac Aztec suffered at least 3 windshield attacks, several spinouts…shootings, brief airborne fly-overs, excursions exceeding 100mph, jaw-dropping emergency stops, direct hits on two human beings, and innumerable panic-driven shock-absorber-challenging sprints across town, and never once missed a beat.  It always came through for Walter.
VO example: Despite open disdain and derision from visiting colleagues, your 6-yr-old Dell WinXP desktop delivers the goods every day.  When your friends rush out to get the latest iteration of Adobe Audition, but your clients love the work you do with Audacity, who cares?   CourVO preaches the holy grail of social media, but your cold-calling regimen with a plain old land-line is reaping rewards.  Everyone is using a Sennheiser MKH416, but your $100 MXL990 is golden ’cause you’ve treated your room right.

(HONORABLE MENTION)  People want to help.  They really do.  Thankfully, the well of human goodness has not run dry.  Ask, and you shall usually receive.  Even asking in a veiled spirit of evil, unsuspecting people will help.  Not that you should do that, but it just goes to show.  We all depend on the kindness of strangers from time to time.
BrBa example:  Jesse and Walt have just wandered in from an endless walk across the desert.  Everybody’s searching for them, and they have to come up with a doozie of a lie to cover their backsides  (see #3).  How do they get home?  A migrant worker pulls over, and offers a ride in the back of his pick-up to a pretty strange-looking clandestine meth cook.
VO Scenario: A fellow colleague shows up in your town for some weekend R&R sans their mobile equipment.  Then, a steady client calls them in a panic.  They need a pick-up line done “yesterday”.  The colleague calls you.  “Can I use your studio?”  Your answer:  “Of course you can!”  You become a hero, make a friend, help the world go around one more time, and coincidentally their client asks your friend if you are available for some future work.