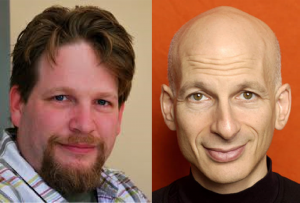 My life online:  I figure my eyes are on a computer screen, an iPad screen, or a smartphone screen close to 6-8 hours a day.  Yes, I do have a life. I get enough sleep, I exercise, love my wife and kids, and have hobbies.  It’s not constant contiguous hours…just accumulated hours.

I’ve read Seth Godin extensively.  They say he’s a marketing god.  I say he’s a very smart guy who knows he has a cult following. I also think he’s safely ensconced from a lofty perch away from nuts and bolts, truckers, farmers, salt-of-the-earth, struggling entrepreneurs and working stiffs.  I could be totally wrong.  That’s just the aura he puts off.  All-knowing. Unreachable.

That’s why I like Chris Brogan.  He’s a little younger, a little more hungry…very savvy, and he’s in the trenches.  Being from a different generation than Godin, he doesn’t just pontificate digitally, he acts out his ideas online.  He tries new things, makes mistakes, keeps his ears to the ground, talks to a lot of people, and puts into action his ideas.  He’s approachable. I guess you could say he’s a thinking man’s doer.  Godin is a just thinking man.

Again, I could be way off, and oversimplifying my assessment…but I don’t think so.  They’re both obviously influential, erudite marketers.

Why the analysis of these two guys?

What is YOUR personna to the eyes online?  Are you approachable?…or just smart.  Have you arrived?…or are you always arriving.  Do you know it all, or know that you DON’T know it all?

See Chris Brogan’s article: BUT ENOUGH ABOUT ME to see what I’m talking about.