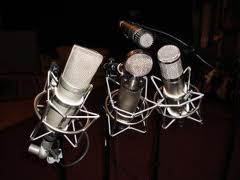 Just about every new mic shoot-out, mic comparison, and mic discount advertisement gets my attention.

Are you similarly afflicted?

I realize this is a geek’s cross to bear, and it runs more rampant on the male side of the aisle than the other.  But I think we all bear a little responsibility for making THE MIC more important than it has to be.

As much as I love shopping for geeky stuff, I’m not in the market for a mic anymore. I’ve got all I need. More than I need. But every time a new mic article comes out, it reminds me of some truisms about mic selection that bear repeating.

Some of those “feel-good” discount runs on mics can mislead. A very knowledgeable voice artist once commented on a AKG C414 deal with this caveat: “…’you serious about the c414 as a vocal mic?…They’ve been pretty much relegated to micing pianos and some horns. Terrible, terrible vocal microphones….”

Others, though, recount fondly their use of the C414 in past sessions, and how it brought out the best of their voice. No other topic rules VO conversation like mics (well…maybe ISDN). So at the risk of sounding incredibly trite, may I remind you of the:

1) Mics are an incredibly personal choice. The Sennheiser 416 has earned its reputation, but it’s not good in confined spaces (small closet recording booths), it’s not particularly well-liked by the female gender, and it’s not optimal for audiobook narrations. There are probably more reasons why it’s not for everyone. You’ll hear it over and over: find a way to beg, borrow, or rent different mics — brands, prices, technologies, and orientations — until you can tell what’s right for your voice. Try it out in YOUR own studio. And don’t even believe YOUR ears. Ask trusted audio engineers to give you feedback on the different ones.

2) Don’t be swayed by price (too much). Peter Cutler, the engineer who travels with Marice Tobias for all her workshops, swears by the Chinese-made Studio Projects C-1. It’s $300 or less. There are other, similar stories. Decent-sounding mics for your voice can be had for a decent price.

3) The Mic is only as good as the environment in which you record. Yes, a great mic can overcome a lousy recording space. But similarly, an optimal recording environment can make a mediocre mic sound like butter. Strive for a reasonably-priced, good-sounding mic (for you), WITHIN a well-prepared audio space, and you are are going to kill your auditions!

Honorable mention: Don’t go by looks. Just because a mic fits your pre-conceived notion of what a mic SHOULD look like, doesn’t mean it’s gonna sound good.

‘Perfect example is the CAD E100S, which — to my eye — is perfectly ugly in appearance, but gets rave reviews from everyone.  In fact, I finally relented and bought one for myself.  🙂

[This is a good time to mention that WoVO members get a 10% discount at Sweetwater on purchases of $300 or more.]