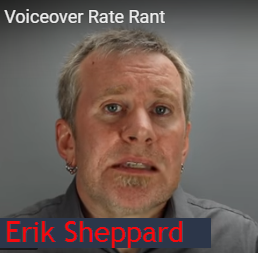 Probably more than 10 years ago, Erik Sheppard called me and wanted to know if it was worth pursuing a career as a TV news person.  I understand the allure.  I fell to it myself 37 years ago.  In that phone call, I managed to talk him out of it, and later I fell hook-line-and-sinker for voice-acting; which is Erik’s conquered realm.

Maybe I shoulda called him before I jumped over the cliff. Perhaps he would’ve talked ME out of it.

Why?  Let’s face it.  Our little corner of the marketplace is under siege.  Rates are dismal.  Countless voice actors have offered analysis of the causes, and opinions are deep and wide, but solutions are elusive.  Some blame the unions, others blame newbies, the P2P’s, and hobbyists.  Maybe it’s ALL that.

But let’s be glad the questions are being asked.  World-Voices Organization was practically formed for this mission.  We realized early on that being the VO POLICE would not work.  We’re not qualified — NO ONE is ultimately qualified — to judge the subjective merits of this coach, or that producer, or any talent for that matter.

Nope, the best approach would be to educate, create awareness, and strongly encourage newcomers to do their due diligence.  If one would but spend time researching, asking questions, checking references, and using tried ‘n’ true business common sense…THAT would be the most valuable advice to heed.

…and yet the rates continue to drop.  Precipitously.  Erik should know.  Aside from being a successful voice actor, he’s also an agent (Voice Talent Productions).  He claims the industry isn’t E-VOLVING, it’s DE-VOLVING….and fast!  Maybe just education/awareness isn’t enough to keep the dam from bursting.  Maybe more immediate and conclusive action is needed (the ole desperate times call for desperate measures adage).

See this blog:  GOLD IN THE VOICEOVER FRONTIER…and this one: QUALIFIED TO BE A VO COACH?

As you watch Erik’s excellent video summary below about the rates quandary facing us all, just remember: the success formula for one voice actor does not necessarily translate to VO success for everyone else.