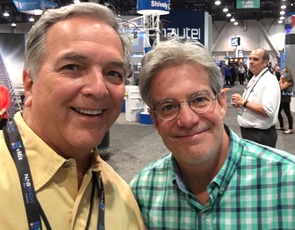 National Association of Broadcasters.  One of the biggest conventions on the calendar of a city that has more/bigger/better conferences than any other place on the planet.

But why?  I mean, I get CES (Consumer Electronics Show)…THE highest attendance at any Vegas convention of the year.  But NAB?  Isn’t broadcasting kinda hurting these days?  Then why did 100,000 attendees from around the globe flock to NAB this year?

Because “narrowcasting” isn’t as sexy of a word as broadcasting, I guess.

“Broadcasting” has come to mean all the many ways of digitally getting a message across to as many people as possible, but not necessarily a LOT of people (like the networks CBS, NBC, ABC, and FOX), just a lot of the people who care about any ONE thing.  In that sense NICHE is the new Broadcasting, but “nichecasting” is also not a sexy word.

Oh sure, the traditional legacy means of creating TV & radio programs, and sending a signal up the broadcast tower to be picked up by tuners from the airwaves is still a viable paradigm, but fewer and fewer people are watching/listening.  Just ask a millenial, or any of the X, Y, or even Z generation trendsetters.  Just ask ’em where they get their information/entertainment/news/music/media.  They’ll tell you the portal almost exclusively involves a smartphone.

So in that sense, the broadcast world is adapting.  The equipment vendors, and the technical geek squads or engineers are staying busy, but the conduit is changing.  It’s a FB livestream.  It’s a periscope feed.  Catch the latest on Snapchat or Instagram.  TV is for binge-watching Netflix originals…not the evening news.  People want their sports on a big HD screen, but just about anything else (cat videos) can be on grainy, poorly-lit, shaky YouTube channels.  Acceptable!

Like ISDN and radio, traditional TV broadcasting will not go away completely. Just suffer a thousand cuts of degradation. It will…it IS…morphing.  Believe me, the big money-makers of yesterday and today are desperately trying to translate their money tree into a viable income stream in this new world.  And you can bet advertising will be involved.

I ran into Townsend Coleman at the ipDTL booth Tuesday.  I’ll tell you why tomorrow on this blog, along with comments on the new ipDTL functionality.

Hey, as a legacy broadcaster, I’m pedaling as fast as I can to stay agile in this new world, too!