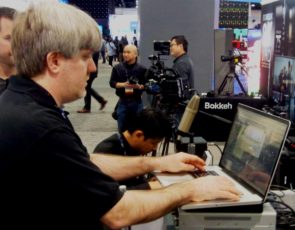 Robert Marshall is a genius with a Beatles haircut.  It works for him…the haircut…AND the brains.  I sought out his humble booth at NAB, because I know he’s always improving the Source-Elements prodigious product line…and would have news to share.  I wasn’t disappointed.

It’s hard to mention Source-Elements without prompting a comparison to ipDTL.  The reverse is true as well.  In:Quality’s Kevin Leach mentioned Source Connect several times in talking product development.  Later that night in a dinner conversation with George Whittam and Dan Lenard, we all agreed the competition is healthy in a capitalistic way.  One is typically just a stutter-step behind the other in some current iteration of an advancement, and they take turns leading the other into new territory.  ipDTL has an edge in marketing.  Source-Elements has a longer product legacy.

All the more interesting then, that their innovation has led both concerns back around to ISDN in a rather circular way.  Yes, both companies are vying to be the choice in ISDN replacement technology.  But in the current round of development, both are turning to ISDN to complete the circuit. ipDTL and Source Elements make the bridging connection so seamless, that the producer/client/customer (hopefully) fails to notice the process or the quality of signals

I was impressed with Robert Marshall’s interface, which lets you choose the ISDN codec of your choice (not an emulation – the actual codec), and book a set of S/PIDs in advance.  SC’s version gives you the option of locking in permanent S/PIDs in a subscription program.  Marshall says it’s ready to launch in about a month.  ipDTL isn’t ready to announce it’s permanent S/PID #’s roll-out…but everything else about their ISDN bridging service is already consumer-ready.  That’s about as near to parity as you can get.

Marshall was especially keen on noting another product being showcased at NAB: a box that pairs with your ISDN codec that essentially bridges to IP *and* lets you control the codec via the internet.This is not yet on the market, but close.  Perhaps this is a nod to the entrenchment of ISDN in markets and production houses.  We talk about that in the interview below.

Today’s blog lets Marshall explain in his own words some of the features of their new bridging service, and what a subscription might cost.