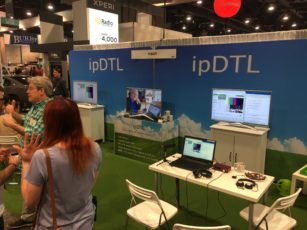 The folks at in:Quality did it up right for the big NAB show.  Kevin Leach bought a nice big booth in the North Hall with excellent visibility and steady foot traffic.

Upon arriving, I was happy to see any number of Vegas-based voice talent manning the booth, handing out pamphlets, and answering questions.  I was told their presence was due to the efforts of our own Melissa Moats of the Voice Actors Studio in Henderson, a suburb of Las Vegas.  The always helpful Audio Engineer Kerri Donovan had assisted with set-up from day one. And to my surprise a steady presence at the booth was top LA talent Townsend

Coleman didn’t have to be coerced to be at the ipDTL booth…he was excited about it!  He’s all but abandoned ISDN for Leach’s IP solution, and was an enthusiastic apostle for ipDTL to anyone who would ask.

Same for Kevin.  The video (below) says it all, and Kevin starts off by explaining an installation he’s completing in LA.