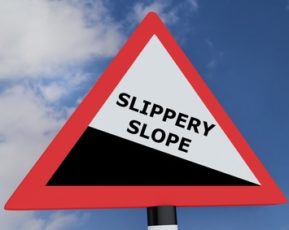 Some voice actors think it’s alarmist when a hue and cry goes up against ever-plunging compensation rates.  “The free market will adjust,” they say.  “The Global economy is driving a correction,” is another thing mentioned.  Or even, “everybody has to choose for themselves.”

My contention is that we can’t ignore the butterfly effect…or even the domino effect; that we live in a community where all actions have reactions – sometimes negatively affecting others, or the population at large..

The butterfly effect is the concept that small causes can have large effects.

A domino effect is the cumulative effect produced when one event sets off a chain of similar events.

That last one was used to warn against the spread of communism in Vietnam, and turned out to be only marginally true.  The term “slippery slope” is a rough approximation of domino theory in that once a paradigm is broken, it becomes harder to stop the “slide” to a similar consequence happening faster and faster.

Why all the philosophy, Dave?

Well, in the Rates Roundtable, in WoVO Best Practices, in endless VO conference sessions, webinars, and newsletters, some of us have been warning about the dike starting to leak (another analogy) when it comes to plunging VO rates.  More and more agents are decrying the development.  Even LA/NYC-based SAG-AFTRA voice actors are starting to notice the edges of their world flaking off by the effect.

Fiverr, ODesk, eLance, Thumbtack, UpWork and other online clearinghouse sites seem to be contributing to this trend.  Then I noticed this the other day:

In the real world, a decent demo by a seasoned producer is anywhere from $1200-$2200 depending on a number of variables, and I want to quickly state that it’s not the cost that makes it a great demo, it’s a great demo because the professional producers out there certainly earn THEIR fair rate.

Click on the above graphic to follow the link to the site where you can see the full offer with all the sordid details.  Normally, I am loathe to send ANYONE to Fiverr, but you really gotta see this.

Oh, and by the way, the original post was on the LinkedIn group administered by (ahem) Voices-dot-com.

So no…I don’t see how ANYONE could claim that one little domino falling over will create a slippery slope.