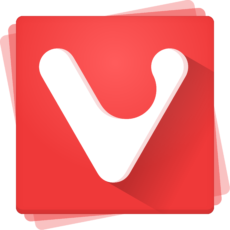 …by a new browser!

Really?  I thought the browser wars were over and that Chrome had won.

It did, but now there’s a better browser beating Chrome at its own game:  Vivaldi.

Vivaldi comes from the same developers as Opera.  It’s based on the Chrome code…so don’t feel like  you’re cheating on your girlfriend or anything.  It operates like Chrome, and even accepts Chrome extensions right from the Chrome app store.

Vivaldi is good on Linux, Mac, and Windows.   Sadly, there is no smartphone app yet.  But Vivaldi’s community is vibrant and promising.

Vivaldi came out last April, and not that much has been written about it since then. But believe me, now it’s worth another look if you poo-poo’d it the first time.

It installs quickly, and you’re up and running in no time.  I haven’t used Chrome for several days now, and haven’t missed one thing about it.

Here’s a pretty good evaluation of Vivaldi written last November.  Since that was written (5 months ago!) The Vivaldi developers have been busy fixing a few things.  It’s robust.   See the Vivaldi Blog for latest updates.