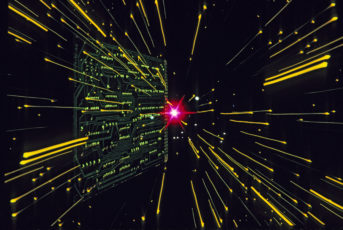 What’s it like in the city where you live?  Do you know ANYBODY who still reads the physical newspaper?  Who listens to radio anymore?  When’s the last time you’ve seen a 35 mm film camera?

No, TV is not going away…just like radio didn’t die when Edward Murrow ruled the Tiffany Network.  But it will be diminished.  Printed newspapers will be rare…..maybe gone.

I’ve said it before here on this blog: one must adapt and be agile, or lose out.  Luckily, most independent freelance voice actors I know are shape-shifters, quick to morph and follow trends.  Those who don’t will drop off…move onto something else…or retire.

This is why Social Media has a place in any voice actor’s marketing plan.  You may not like the way it plays fast ‘n’ loose with culture, but it’s almost always the harbinger of change.  On the pages of Tumblr are the forerunners of the next big thing.  In the endless stream of tweets on Tweetdeck, the emergence of new paradigms.  Among the 1.6 billion souls on FaceBook?… humanity’s democratic saga will be played out in fits and starts.

Voice Actors will play a part in it all.  Nothing is so moving as the human voice.  Going back to the Egyptians and Greeks; orators, thespians, and messengers — using the profound power of speech — have moved minds and influenced history.  Now add the power of digital media and multiply the reach of your speech 10-million times over.

Where newspapers disappear, internet streams of information will require your words.  As TV diminishes, YouTube & Vimeo will rise.  Movies may lose the big screen but gain a thousand other smaller screens in infinitely more venues, and with niche markets all requiring spoken words.

No doubt, the pace of change is exponentially increasing…but not so much that a smart person like you can’t see it — if you just pay attention.  Are you the JP Morgan or John D. Rockefeller of the 21st century?  What railroads and oil companies will rise from the next digital dawn?…and where can you capitalize on that change?

Pay attention…the world’s changing.  Will  you change with it?