The Scary Thing About Change… 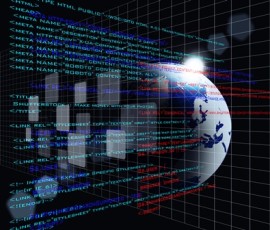 …is that it happens all around us every second…but we can scarcely see it.

The best analogy is the claim that the world is flat.  The view from space proves that theory wrong.

Conversely, hindsight proves the theory of change is true.

I’ve been living the change in popular media.  Every new edict from an image consultant, or a talent coach, or news director over the years proved to me the world was moving along.  Did I want to go along with it?  Simple:  did I want a job in TV News?

Some change you almost CAN see.  Lately the pace of change in media is nearly palpable if not downright visible.  Most of it has to do with the disruptive nature of the internet.  That came home to roost in just the last week at KLAS-TV where I work as a newscaster in Las Vegas.  Our new owners decided that COX cable in this market wasn’t paying them enough money in retransmission rates for our channel’s local content.  For a few days — with ratings and the SuperBowl in the balance — we were actually “black” on the cable (about half our viewers).  Amazingly, on the first day of ratings, the “suits” were finally able to make a deal.  Yay for the almighty dollar!

But cable everywhere can smell the grave.  No one REALLY needs them anymore.  “Cord cutting” is rampant, and creative ways of getting all the programs you love are fairly successful given a decent internet connection.

That’s just the tip of  the iceberg, though. Advertisers, content providers, viewers…the entire universe of information/entertainment/popular media streams is in the midst of a HUGE upheaval.

Never have I seen a more cogent, better researched, nor better presented article on this than in the Redef.com essay written by Tal Shachar & Liam Boluk.  I have no idea who these guys are, but they’ve nailed it.  I had to go back and read some passages over and over to fully grasp their meaning.

Wanna know why content curation is turning the whole paradigm on its ear?

“…the next evolution in the media value chain will be the rise of decentralized curation – with individual tastemakers building up mass followings and driving enormous consumption by recommending various articles, videos, shows, films, albums, exhibits and so on…”

Don’t understand why the overflow of content creation works against talent?

Please take the time to read it to see where all this upheaval in media is going:

Age of Abundance: How the Content Explosion will Invert the Media Industry
CourVO