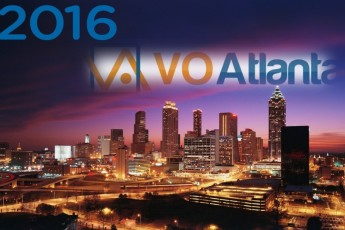 …will I see you in Atlanta?

The 2016 Voice Over Atlanta conference will be its 4th year, but it will be my first visit.  VOA is an extension of its founder and executive:  Gerald Griffith, and his company: VoiceoverCity.

Friends who went last year raved about the energy of the event.  ‘Last I heard, some 400 people associated with the voiceover business will be there, including coaches, agents, professionals, newbies, wannabe’s, producers, talent, and more.  That’s a number that certainly defines critical mass for a VO event.

Given that most of us work in relative isolation, I really believe it’s healthy as a voiceover talent to seek-out events like this to make human contact face-to-face with your peers and influencers.  The question is…there’re so many of these conferences now…which one do you choose?  How MANY do you go to?

Only you can make that decision.  Clearly each one has a different appeal and focus.  Maybe the one closest to you is the right one.  Travel/hotels/registration can be expensive.

The point is that you’re missing out if you don’t go to one of them.  Can’t go to Atlanta next weekend?…then you’re invited to Vegas for WoVOCon-III about 5 weeks later (gotta be a member of World-Voices Organization).

A few years ago, I burned out on conference-going.  I hit 5 in less than a year.  That was over-kill.  At various VO

conferences I’ve made presentations, MC’d, hosted, held sessions, been on panels, and helped organize/administer VO events.  No regrets, but there is a limit to what’s reasonable, and luckily I found it.

All the respectable names will be in Atlanta, and then some.  I look forward to seeing old friends, and making new ones.  I’ll be on a panel, and I’ll be attending some X-Sessions.  I’m also looking forward to getting to know Gerald, who is not a voice-talent.  In that sense, VOA is different from all other voiceover events I’ve attended.  Gerald is a professional organizer/promoter/event planner/manager, and maybe it takes someone like him to make a success of it…someone who looks at the event as a business, and not ONLY as a congregation of voice talent BY voice talent.

Chances are, you will recognize me before I recognize you, so please tap me on the shoulder and introduce yourself.  I want to meet you and thank you for reading my daily blog musings.  I want to talk to you about World-Voices Organization.  I want to know about your experience as a voice talent.   Because ultimately my life and my voiceover business is made richer by the community of actors….like  you!