When Ducks Just Won’t Get in a Row 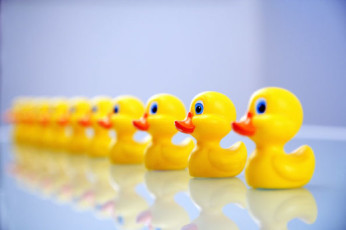 In the 8 years and 2500+ blogs I’ve written on these pages, I can count on one hand the number of guest bloggers I’ve invited.  After all, this is MY blog, and I’m not usually at a loss for material.

Today’s blog, though, IS a guest blog, and from someone who barely needs an introduction:  Bob Bergen.

OK, OK…for those of you who maybe don’t know Bob (really?), he is perhaps most famously the guy who replaced Mel Blanc as the voice of Porky Pig.  But that’s just a smidgeon of the voice-actor that Bob is today.  He’s successful at virtually every VO genre he turns his attention to (cartoons, commercials, promos, live announcing, radio imaging, and more).

Beyond that, Bob operates under a grand style of legacy Hollywood/Union actors and traditions.  He’s become a

sought-after coach, and a busy voice-actor to which we could all aspire.

Bob wrote a long entry yesterday for the Voice Over Pros FaceBook Group I administer with Terry Daniel, but it was extremely well-written, so I convinced Bob to let me put it here on the pages of my blog.  It’s not one of his usual erudite responses to a group question, but a spontaneous tour-de-force that he explains in this manner:  “…I posted that after reading SO many “my career is at a standstill/what can I do??” comments.  So many do so little, and they really have no idea.  Or, you tell em what they need to do and they are nothing but excuses!…”

These are the three words most commonly heard from talent pursuing VO 20 years ago when asked, “When are you going to do your demo?”

The actors who were asked this question were immersed in acting and VO. This was the question asked by fellow students, top vo actors, coaches, even agents and casting directors. But the serious actor, the one who knew that they get one shot per listener didn’t want to put themselves out there now. They wanted to be ready.

What were the voiceover ducks? Well, yes, a VO duck did indeed mean you were well trained and honed your acting and VO skills. Doing this was not achieved by a few classes with a demo upon completion. You studied acting and improv for years. Once you got those acting skills honed you studied voiceover. Back then there were less than a dozen VO teachers. Everyone knew who they were. There honestly were very few bad ones. There were some that gelled with some more than others. But back then, all of the teachers were working pros. Brian Cummings, Joanie Gerber, Louise Chamis, Michael Bell, Dave Madden, Daws Butler. Gems, all of them! I Studied with them all, and more. Some, like Daws, I was with off and on for 10 years. Some I was with weekly for 2-3 years. Classes back then were $10-$15 a week. Then there were those wonderful all day Saturday workout groups. These workout groups consisted of the best of the best. We are talking 6-7 figure vo actors, who still knew the value of staying sharp at the mic. They’d do the workout groups so they didn’t use their auditions as their workout. Why I was allowed to play with them at this stage in my career, I have NO idea. But they embraced me. And I learned by watching these masters do their thing.

Which leads me to the next VO duck. Who you know. You were as good as the company you kept. Years of rubbing elbows with the best of the best. So when you WERE ready, they were already buzzing about you. Everyone knew you or knew of you. Everyone had heard of you, including agents and casting directors. Your demo was anticipated. It went to the top of the listen to pile because you strategically got the industry juices flowing. You probably had the opportunity to get a demo to these buyers years ago. “Boy, if you just had a demo I might have work for you!” This is the line that made many make that premature demo before they were ready. It was a BS line. What they meant to say was, “Boy, if you just had a brilliant demo I might have work for you!” Second chances are hard to impossible. There are too many brilliant choices out there. No one needs to take the time to offer a second chance. You wanted to be ready!

Another duck was the survival job, or jobs. You didn’t go into vo to make money or pay your bills. You never expected to. You went into it for the love of acting, period. And by doing so, you never ever undercut your fellow actors. It was unheard of. You didn’t take low ball offers for “the experience” because the only experience you wanted was the kind enjoyed by those you’ve been rubbing elbows with. And, your elbows were raw. You wouldn’t be caught dead doing anything that wasn’t professional. You knew that to make it you needed to not just be accepted by those who came before you, you needed their respect and their referrals. You would never damage their livelihood to pay your bills. You knew it was about the industry and your overall career, not for the moment or the job. I had 5 years of survival jobs. It’s been almost 30 years since my last. But I never thought of my last as my last. I’ve just been fortunate to have been able to not go back to a survival job. That said, even today a survival job is not below me. There may come a day where I do indeed need to do what all actors do from time to time and get another survival job. Hey, that’s show biz!

The next duck is the union card. Now, I know that 90 plus percent in the VO Pros FaceBook group cannot relate to this duck. But just hear me out. That union card put the professional in the vo professional. It showed the agents, the buyers, the casting directors that someone took the chance on you to hire you for a professional acting job. It meant a future. It meant retirement and health benefits. And residuals during those slow periods! It brought with it the big picture. Back then when you qualified for health benefits you paid zero premiums. That has changed with the erosion of union work. But our premiums are still crazy cheap. That union card also allowed you to compete. The industry was over 90% union, and no one would take you seriously without that card. Because of the effort it took to get, that card told the industry “I am ready.” Because vo is now over sixty percent non union, and half our country is right to work, I know the union card doesn’t mean the same thing to the majority out there today. Trust me, I get this!

Then there’s the marketing duck. Marketing back then consisted of snail mailings of hundreds and hundreds of reel to reel demos. THIS WAS NOT CHEAP!!! You needed a marketing budget duck. I spent about 5-10 grand a year in mailings. Agents back then, at least the good ones, would give you their master contact list of buyers. You would send your demo to everyone! My first demo in 1980 cost $850. The crack and peel labels were a good $1000. I remember the actress who got the first color crack and peel labels and spent $5000 for the graphic designer and labels!! But, she was smart! She knew investing in her career was not just important but she needed to impress. Then there was the time! Typing the cover letter, sticking on the label, etc. My parent’s dining room table was an assembly line. But I learned from my years of elbow rubbing that this is what the most successful were doing. I didn’t begin this until I had the money in the bank to market. One bit of advice Casey Kasem gave me was,”This business will always be there. Don’t do it now, do it right!” Great advice!!

Once I had all my ducks in a row, I was ready!! What was I ready for? I was demo ready! I was ready to be a happily out of work actor! But I was ready for opportunity! My bills were paid by my survival jobs. My networking with the major players got me a top agent. I was still studying animation with Daws Butler every Wednesday night and in my all day Saturday workout group. But I knew that I was ready! Not ready to make money at VO! I couldn’t care less about making money! I wanted to be in the game! And if/when I did make money, I knew that my future and my health benefits were taken care of as well with every job.

ALL of this was strategically planned out. It was a 4 year journey from first day in class to out of work, ready, actor. And then another 5 years of survival jobs before I was able to work full time as an actor. But during those 5 years, every dime I made in vo went right into the bank. I lived only on my survival jobs, from Universal Tour Guide to holiday Mall Santa. And when I quit that last survival job I had 6 figures in the bank of cushion. I lived way below my means and continued to save more than I spent.

NOW, I am well aware the times they have a changed! And I know that much of my journey is both obsolete and a foreign language to most here. But here’s the deal. For the very few that choose to look at this journey and strategy and adapt it for yourself, even just 10% of it, you will be 10% ahead of those who don’t. For the majority this is just a nostalgic essay. But I still believe no matter the times or where you are in your career, being a professional actor means more than being a working actor.

Actors today have a luxury I did not have when I was starting out, which is the internet. You can go to YouTube and watch cartoon actors working. You can research a company’s corporate website before your commercial audition to get a feel for their intended audience and customers. You can through social network reach out to who used to be unreachable. You can listen to and research the demos and marketing tools of the most successful working voice actors out there. You can market to millions with one click. The only cost is time!

Now, go out there and tackle 2016! And whatever journey is right for you, just enjoy it! Don’t make excuses when things don’t go your way. Be honest with yourself about what you really want and what you are willing to do to get there. And, my door is always open! Never hesitate to knock!