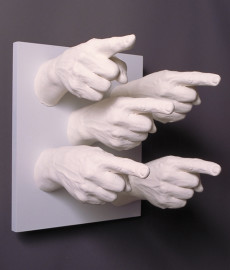 When ya get too close to something, you lose perspective.  Several situations already this week reveal the wisdom of that adage.

Just ask Graeme Spicer, who got close enough to a firestorm of interview aftermath to realize that standing up for ethical principles can bring backlash — good and bad.

Just ask any of the scores of voice actors who maybe got too close to their own righteous indignation, a social media account, and an axe to grind.

Hey, just ask me!  I’m a news guy, and this controversy drew me like a moth to the flame.  So close to the flame, that I got singed by my own enthusiasm for righting a wrong.  Then the WoVO hat that I wear got me too close to the egotistical belief that I HAD to have a voice in this conversation.

We’re all probably too close to the tension surrounding this week’s disagreement to realize the truth lies in the middle somewhere…as it always does in polarizing situations.

I could go on.

This week, my oldest daughter fell down a flight of stairs and broke her foot.

THAT is important.  All this posturing?  Not so much.

Old media veterans will recognize the phrase:  “There’s no such thing as bad publicity”.

I’m not saying protesting unfair practices isn’t worthwhile.  Just that contributing to the negativity actually works against your cause.

Speaking as an individual and as the Prez of WoVO, my energy will heretofore be spent more on sticking to the mission of providing a viable P2P alternative in the VO marketplace, and less on trying to answer an obstinate PR spin.

THAT is something I CAN get close to.