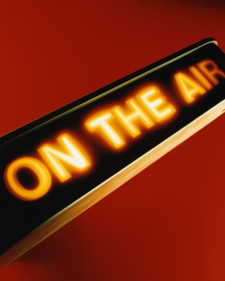 The same thing is happening to local TV now.  The company that bought the station I work at owns upwards of 120 stations and growing.  Now, it’s trying to buy Media General.  At the beginning of the decade, KLAS-TV had about 160 employees…now we have around 110.

Conglomerate ownership isn’t the only reason for the decline in over-the-air broadcasting.  Cable was the first salvo in the demise.  Then the internet.  You could argue that the new broadcast ownership is only doing what it can to keep the industry in a profit.

But profits are getting harder to come by.  Mismanagement doesn’t help.  Read this article from the LA Daily news about Cumulus Radio’s destruction of its own stations.

I bring all this up to re-state the obvious.  Some of the best-paying VO jobs have traditionally come from Radio/TV ads and promos.  But even that model is suffering.  If broadcast as we know it becomes a damaged media through the aforementioned mismanagement, disruption from the internet, and other market forces…woe to the lowly voice actor struggling against the NEW Wild West of YouTube Pre-rolls, in-stream advertising, and outrageous buyout contracts.

But like ISDN, this is a slow death.  There is still plenty of money changing hands in the airwaves.  Wanna keep up with what’s going on?  Click on this offer from Radio World… a fairly decent periodical that evaluates the medium from top to bottom, including politics, the business of broadcasting, and even technical/equipment reviews.

As a bonus,  you will receive FREE access to issues of Radio World on the iPad/iPhone. Download the app in the iTunes store.

Before you leave, read the article linked below indicating a strike by SAG-AFTRA voice actors in the interactive game business are moving ever-closer to a stand-off (strike) with gaming developers.  More than 96% of the voted to approve a strike…WAY above the 75% threshold.

The only thing that’s constant is change.