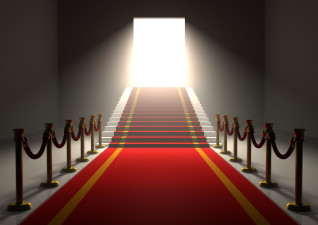 Please don’t take this the wrong way.  In my home town I’m recognized everywhere.  Only in Las Vegas, but that’s where I am 99% of the time, so wherever I go, people point and smile with a knowing nod.  It’s inescapable.

As a TV personality, I’m also inescapably linked to — and am representative of — KLAS-TV, the CBS affiliate in Las Vegas.  My face is my passport.  I front the news, therefore I speak for the station, and wherever I appear, I represent the face OF the station.  This is something KLAS promotes, and which I accept as part of my job description.  It’s a carefully contrived façade, but one that works fairly well.

Most of the time, this “celebrity status” a blessing.   Sometimes it’s a hassle.

For instance, at midnight on a weekend, when I’m at the supermarket in my camo shorts, a t-shirt, and unshaven for 2 days, I’d rather NOT be recognized and engaged in conversation about a story we did last Tuesday about veterans affairs, but to keep up the façade…I must.  In my mind, I pass it off as a compliment that the person who recognized me is watching the news, and that’s a diminishing population these days, so I must be gracious and charming and diplomatic.

More than anything, the hassle of being the face of the TV station is that I officially have no personal opinion about ANYTHING.  Officially.  That is — publicly.   No politics, no religion, no polarizing issues…none of it.  I’m neutral about it all.  Revealing my TRUE feelings would ostensibly lose the station half it’s viewing audience, and that’s a big no-no.

I say all that to explain the following:

Now that I’m the emblematic head of an organization that represents nearly 500 dedicated and professional voice-actors, I’m feeling the same “inescapable” pressure.

Do I have strong personal feelings about the issues challenging our business right now? Darn right I do!  Can I blurt them out online?   Just a minute there, sparky!  Is that “DAVE” talking, or the President of WoVO talking?

The lines get blurred.

Certainly, I push the line a little with missives like Tuesday’s blog: “If not P2P, Then What?”. I admit I’m verging into controversy even with that.

Then, there’s the argument that the leader of an Industry Trade Association should….uh….LEAD.  And that’s a question of style.  Am I the Donald Trump type of leader?  No.  I don’t like to shoot from the hip and explain later.

Luckily, I have an extremely brilliant and savvy executive board WITH me in a leadership role.  The danger with THAT is we don’t want to get top heavy and institutionalized like SAG-AFTRA.  So far the WoVO executive board is an highly personal association.  We fight, we have fun, we disagree, we decide, and most of all, we discuss.  And through that discussion we usually arrive at equitable outcomes.  It’s decision by committee…but what a GREAT committee!

Right now there’s a groundswell of disapproval to reports of a VO listing site’s egregious and worsening treatment of its subscribers.  Many WoVO members are involved in the outrage.  Some are expecting WoVO to lead the charge of condemnation.

This is why we won’t get down in the dirt:

There is little to gain, and we want the high ground.  Online casting sites are part of VO’s future.  Done right, they can be dynamite.  Whether a certain Canadian-based VO casting site survives by mistreating it’s members is undetermined, but some form of this digital paradigm will be in our business from now on.  That’s why we’re working towards a better one (see para below).

We believe in educating WoVO members to the disadvantages of P2P’s done badly, and encouraging them to make their own decisions.  We’ll help by issuing a position paper on P2P’s in our next newsletter.

We also believe in positivity.  Positively promoting our OWN casting site:  Voiceover.biz.  Why?  Because we think the new ideas we’re introducing with this site constitute casting done right….featuring talent, and the relationships they form with the clients as the main purpose…not profits, pay schemes, unmentioned commissions, and subterfuge.

We need your help spreading the word.  Tell your clients about Voiceover.biz.  Join our ranks. We need your participation…your intellect, your ideas, your enthusiasm.

If  you’re already with us, we thank you.  Let us know what you think.  Seriously.  Several outspoken members already have, and their suggestions are off-the-charts valuable!  This email gets directly to our Exec Board:  [email protected]

…and the cool thing is:  WoVO is full of celebrities, who are inescapably good at what they do.  LOVE it!