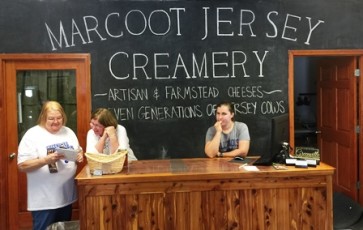 My mind is like mush.  Taking time off, and visiting a part of the USA diametrically different than your home-20 is disorienting.

In this case, I was in my home town for the traditional H.S. Class reunion.  So weird that when I got there, the place was full of a bunch of old people.  😉

In the South-Central Illinois town of Greenville where I grew up (pop. ~5,000), farming… rules.  One of the biggest and still developing success stories around Greenville of late begins with a classmate.  It’s an inspirational story that could benefit any one of us voice-actors.

John Marcoot (like me) is the descendant of Swiss immigrants.  The dairy farm that sustained his family for decades might have ended with his retirement, but for the fact that he took a smart risk, made careful plans, depended on family and friends, and stuck to his guns.

Marcoot gathered his daughters one day and told them that the dairy farm would likely fold unless they were willing to go “all-in”.  Their creative decision was to do something that was common in Wisconsin, but was almost unheard-of in Southern Illinois: create a creamery (that’s a dairy operation that makes cheeses and milk products…not just milk).

They called in some markers, invested money they didn’t have, educated themselves, practiced and failed, picked themselves up and tried again.  They got creative, worked on marketing, worked 20  hour days, and worked smarter.  They stayed the course, and started seeing success in maybe the 3rd or 4th year.

Now, they’re supplying gourmet cheeses to all the supermarket stores in St. Louis.  The Cardinals baseball team is buying a specialty flavor they devised, and fans love it!  Their latest victory is a contract with the Whole Foods franchise.  Whole Foods is kinda picky whose foodstuffs they sell in their stores.  As a Chicago-based corporation you’d think they’d turn to nearby Wisconsin creameries for their cheeses.  When asked, the Whole Foods buyer told the Marcoot family that none of the Wisconsin creameries could meet their exacting standards.  But the Marcoot Creamery did.

Excellence is the cream that…er…always rises to the top.

BTW, the Marcoot family owns only Jersey milk cows.  USA Jersey milk cows are bigger than their European counterparts, mostly because American farmers have access to much greater stores of corn to feed their herds.

Corn?  While I was there, huge fields of corn were ready for harvest.  Here’s what it looks like just before the big combines move in.