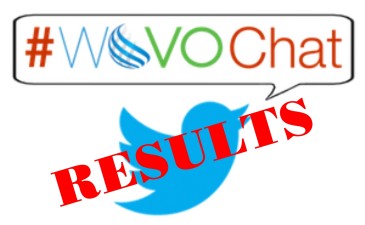 Aren’t these fun?  You could almost forget that a great deal of valuable info is exchanged in the WoVOChats, because there’s so much… well…. CHATTING going on.

Today’s session covered acres of territory on the subject of VO coaching, and brought the added dimension of perceived differences in coaching in Spanish, thanks to the participation of guest Simone Fojgiel.  That’s not to say the other guest — Terry Daniel — is any lightweight…not by any stretch.  Terry’s been freelance coaching AND voiceacting for many many years, and a few of his students dropped in to support him.

World-Voices Exec. Board member Brad Venable hosts the chat every other Wednesday, and partnering in the sessions is WoVO Pro member, and content marketing guru Pamela Muldoon, who acts as the moderator.

Muldoon compiles a Storify record of all the tweets during the hour, and those can be reviewed by clicking this link:

The overall reach into social media grows with each WoVOChat.  Click below to see a look at some of the metrics from today’s WoVOChat.

Below, you’ll see a SlideShare presentation put together by Muldoon.  She sifts through some of the chaff, and posts all the good stuff.

Thanks to those who attended and contributed to the community of knowldege!