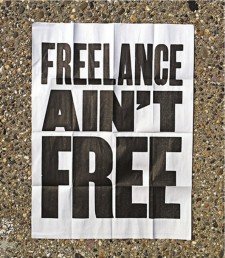 My post Monday on SpeakPage sparked a lot of interest, and a wide range of comments.  We heard from people who were convinced I was encouraging “bottom feeders”, and others who did some quick math and decided it wasn’t all that bad of a scale.

Interestingly, on Anne Ganguzza’s FB group “VO Peeps” a similar debate was raging over a simultaneous post from Andrew Bates offering a paid voice gig.  You can go there to see the thread, but since compensation being offered was so low ($25), this post also drew some strong opinions.

All this “talk” about rates is at the crux of the matter.

The fact is…. ALL freelance professionals are dealing with the same rate/pay/compensation challenges:  Photographers, graphic artists, writers, web developers, etc.  As I’ve mentioned before, SAG-AFTRA sets rate minimums, and should be the final word for us all, but some people hate the union…and the union, frankly, apparently doesn’t consider some of us worthy candidates for membership.  The number of right-to-work states is increasing…and let’s not forget Fi-Core.

That makes it a Wild West….and THAT makes it important to talk about this.  Over and over…everywhere, transparently, ad nauseum if need be.

World-Voices is the emerging new presence in all this.  We always want to take the high road, but we do not operate as any sort of “rates police”.  Our belief is that through all the open-sharing, and by educating our  members, we’ll see just what the market is changing into.  If we embarrass some of the Fiverr’s out there, so be it.  If we show how good pay for hard work still exists…all the better.

Today, Anne Ganguzza and I are hosting a woVO-sponsored online roundtable video discussion on the subject of rates.  Attending will be:

The session is not open to the public, but will be recorded, and later posted on the WoVO website, and other places.  If things go well, we’ll continue this as a series of video webinars under the WoVO and VO Peeps banner in the interest of continuing education.

In the meantime, be sure to read Bobbin Beam’s thoughts on rates.  The article appears on VoiceOverXtra, and follows the line of thinking we’re talking about here.