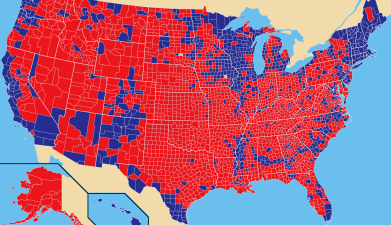 This article has nothing to do with traditional Washington politics.

I don’t remember a time when opposing views became hijacked so completely by radicals.  Polarization on any number of issues is moving further away from the center, and finding purchase on the extremes.

I don’t see it as a Democrat vs. Republican division, nor as a conservative vs. liberal controversy.  I’m seeing it more and more clearly as an urban v. rural divide.

Nowhere is that more clear than in VoiceOver attitudes, opportunities, and cultures.

The manifestations are most distinct in the following areas:

There are more points of difference, but the above summarize nicely a schism of haves and have-nots in our business, based on proximity (or lack of it) to the big markets:  NYC, LA, Chicago, San Fran, Atlanta, Dallas, Miami, etc.

Particularly galling to those voice actors in “flyover” states is SAG-AFTRA’s comprehensive failure to see them as worthy converts to their membership rolls.  I’m not even sure they know voice-actors actually live and work in Oklahoma/Missouri/Utah, etc.!  I’m guessing talent in fairly large metro areas even feel overlooked (St. Louis, Indianapolis, New Orleans, etc)

Further complicating the issue is the ever-changing media marketplace (read: decline of traditional media powerhouses TV and radio)…the advent of digital media — which is particularly hard to measure — and the insistence of East/West coast metro areas to cling to legacy technology, and the marketplace supporting that.

It would be easy to dismiss the whiners by saying these are commonplace advantages that fall to those willing to live in high-concentration urban areas — for many fields of endeavour.

I get that… but it’s a head-in-the sand response to global changes which are already disrupting other industries (music, photography, publishing, etc).  Wake up!  Just admit that the freelancer in Fayetteville, Arkansas stands just as good a chance of fulfilling your voiceover needs as the hack in Hackensack… and let the rising tide lift all ships!

The equalizing force of the internet is democratizing our business.  It’s not red or blue…it’s purple, and it’s high-time for media decision-makers to move off the NYC/LA-centric merry-go-round and discover the capable, willing, and eager talent that lie outside their myopic POV.

Wow…I should run for Congress!