Should a Mic “Look” Good?

Purists and audio engineers are gonna hate me for this one…much the same way car salesmen love car buyers.   Why?  Because car buyers rely entirely to much on the way a car “looks” rather than the quality of the mechanism.

But don’t EVEN tell me the criteria that a mic-has-to-look-good never crosses your mind…’cause I KNOW it does.  Some believe we should only buy mics that sound good, not because they look good, right?  Not necessarily.  Read on!

WE LOVE OUR MICS

After the Oscars, Doug Paul wrote on Voice-Over Pros (the FB group I administer along with Terry Daniel): Did you see the Telefunken C12 mic Tim McGraw was singing into on the Oscars? How much do those babies cost?”  C’mon, admit it.   You were watching that night, and you were wondering too!

Doug was way ahead of me.  I had no idea what mic that was…I just remember thinking to myself how handsome it was.

listen to ‘Should a Mic “Look” Good?’ on audioBoom

About a week before, I had myself posted in the same forum that I was hankering to own the iconic Shure 55SH “Elvis” mic, not cause it sounds great, or I need it…but just ’cause it LOOKS great.  Are you beguiled by this too?

Do you collect mics?  I know voice actors who collect mics like Jay Leno collects cars.  Some for historical reasons (the mic is a collector’s item), some for nostalgic reasons — the old ribbon mics usually fall in this category.  Then there are those mic collectors who buy just because the mic looks like a mic should look — I guess that would be a covetous or hoarding justification?

I hope my dear friend Kelley Buttrick won’t mind if I mention that she occasionally (and proudly) shares pics from her mic collection in online posts.  She displays one of her collectible mics with reverence in her studio, and credits it for keeping her career on track.   That’s her vintage Velocity mic on the right.  Kelley tells me that the nearby University of Georgia has one of the most definitive collections of broadcast mics in the world:
The James U. Steele Vintage Broadcast Microphone Collection.

YOU KNOW WHAT THEY SAY ABOUT BEAUTY…

…it’s in the eye of the beholder.

For me a mic should have a certain physical appeal, or I won’t buy it, no matter how good the specs are.  Believe me, I’m not alone in this view…in fact, microphone manufacturers, too, consider the “sex appeal” of a microphone when designing and marketing their models.

Paul Strikwerda and others have extolled the virtues of the CAD E100s.  I do not doubt their sincerity for one moment, but I will never own a CAD E100s because I think it is the most butt-ugly mic I’ve ever seen.  That’s MY opinion…my definition of beauty.

Does a mic have to be beautiful before I’ll buy it?

Yes. Call it pride of ownership.  Maybe it has to do with the fact that I would like the object I’m spending so much money on to be as pleasing to my eyes as it is a blessing to my voice.  I could never “like” the CAD.  Speaking into it for auditions would color my enthusiasm for my work.

Am I shallow?  Maybe. But here’s my answer to that: there are enough excellent mics out there that both look good, AND sound good, that I don’t have to settle for an ugly mic.

WHAT COLORS OUR OPINION?

No other microphone manufacturer works at the “look” of their mic more than BLUE.  They don’t have the legacy of a Neumann for example, but certainly Blue produces a number of innovative microphones that yield a competent-sounding recording.  However isn’t it the attention to the art of their product that catches your eye? (see red mic above).  Certainly, if the guts of the mic didn’t meet quality standards, then the looks alone wouldn’t fit the bill…but in having both marketing appeal and audio chops, Blue has found a solid base in the marketplace.

For that reason, microphone designers and manufacturers have every incentive to meet both criteria.  In fact, in most cases

function follows form, and has sculpted our idea of what a mic “should look like”.  Consider any number of popular and worthy mics that look similar to the Rode NT-1.  Studio Projects C-1, Lawson L251, Telefunken U-47, Avantone Audio CV-12 and more.  They are metal tube cylinder mics with fine worksmanship, and unique innards, but otherwise unremarkable their physical features.  They “look” like a mic should look (a totally subjective statement).

For others, the form factor of the TLM103 is more to the point of what a mic should be.  Regardless, just like the butterflies who benefit from looking like a certain species of deadly wasp, there is an upside when other manufacturers adopt styles that are already entrenched in audio culture as “looking” professional. 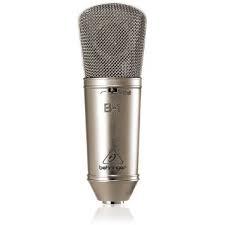 At bottom, though, is the caveat that the guts has to follow the glory, or word will get around, and the mic is dead in the water, so to speak.  I loved the look of the Behringer B-1, and thought the price was right: $100.  But I almost never use it because it’s response is disappointing.

If for some crazy reason I ended up with a CAD E100s in my studio, and I started booking jobs right and left with it, would it not start to look lovely to me?

I sometimes look at some married couples and wonder what attracted a certain husband to his wife, or vice versa (this is an entirely trivial exercise, a la ANYTHING Kim Kardashian does).  However, it’s a fact that your affection for a person or object — based on its practicality –  can color your sense of its beauty and value.  A mic starts to look good, ’cause it sounds good, and becomes a breadwinner for you.

Bottom line:  Like singles bars and new-car lots, we’re initially swayed by the looks of the package, but if the goods inside aren’t quality, then “suh-weet” becomes sour.