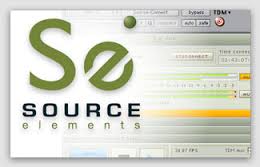 Sometimes you just hafta sally forth and ask, instead of sitting around waiting for answers to come to you.

I asked Rebekah Wilson of Source-Elements about the Holiday flyer she sent out.  It had all sorts of good news about Source-Connect Beta vO.5, and some verbiage about upgrades to their flagship product:  Source-Connect Standard, and Source-Connect Pro…now in a new Version 3.8.

‘Turns out V3.8 is only available for Mac right now, and we all know I’m a diehard Microsoft apostle, so I’ll just have to (sigh) wait, I guess.  She said the 3.8 for Windows should be available by mid-year.

But the NOW v0.5 Beta is worth a look-see.  You’ll find a link to it if you click on the Holiday flyer.  Wilson reiterates their pledge for Source-Connect Now to remain free for 128kbps mono connections between two people.

Here’s what Rebekah had to say about the elves working in their Source-Elements toy shoppe:

“We completed a massive overhaul just before Christmas. Completely different under the hood for future-proof development, and everything is generally much snappier and more stable. We’ve seen a 3-fold increase in connections in just the last 2 weeks since the new year because of how much easier it is to use.
Plans for 2015 include working on Source-Connect integration, and iOS and Android support.

We’ll be releasing Source-Nexus support for AudioUnits and VST, so you can record straight into other apps such as Garageband, Logic, Cubase, Adobe Audition etc.
We have a couple of extra special things planned also, in the coming months that we’ll let you know more about as we get closer to release.”

Then, she sent an addendum later that said the following new features have been added to Source-Connect NOW: