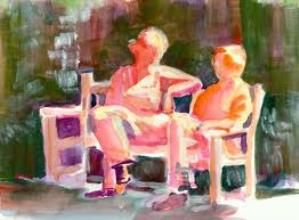 Seems like I’m not the only one who’s had their sensibilities tweaked by the ubiquitous presence of the word “conversational” in audition directions from the agent/client/producer lately.

If you’re still catching up, try starting with my blog from late October:  “Conversational…Schmonversational”.

In a thread reacting to Joe’s article over in a Yahoo group for voice-actors, I came across what struck me as a particular erudite analysis of the conversational style of acting by Scott J. Smith.  I asked Scott if he would mind that I reprint his comments here for everyone, and he agreed.  Thanks, Scott!

What a great debate.  I’ll chime in (as a stage actor, turned film actor, who only recently picked up voiceover):
I believe it was Gary Izzo who said that we must always remember the root of the word “actor” is “act.”  We can place all sorts of interpretations on what we assume an “actor” should…or might…be, but the important verb here is “to act.”  By definition, acting means to elicit change.  As artists, our goal is to elicit change, such as an emotional response in our audience.
In fact, it’s hard to find any type of voiceover that doesn’t connect with the audience on an emotional level:
Announcers excite audiences at the start of a program, or the introduction of something new.
Narrators set the tone or the mood of a story.
Mobile Applications connect with their audience to a certain degree (anyone fall in love with “Siri”?).
IVR systems represent an organization and welcome the caller.
Radio Tags reinforce the energy and appeal of a station.
In fact, done improperly, often as a result of poor acting, the voiceover does not connect with its audience, does not succeed in its mission (setting the stage of a story, selling a product, informing a guest, etc.), and often, that particular talent is no longer needed.  In some cases, a production will stick with such talent, which usually yields poor performance statistics for that campaign (lackluster sales, box office, fewer downloads, less hype, poor overall impression, etc.)
I seriously doubt that any of us don’t act, regardless of the type of voiceover that we do.  Acting doesn’t always mean donning some outrageous character with a ridiculous accent or speech impediment.  You might approach all copy by just “being yourself,” but you do, maybe only instinctively, adjust your performance based on its content, your intended audience, and that all you have to make a connection with another person is through your voice, and that, my friends, is acting.
Gary goes on to propose that children, when playing Cops/Robbers, Cowboys/Indians (or whatever kids do these days) are indeed acting…without formal acting, a contract, or an expectation of an Emmy nomination.  In fact, he goes on to argue that they are more committed to their roles than some A-Listers in our industry who have trained year-round for decades.
They instinctively ask themselves the important questions we do in voiceover:  Who is my character?  To whom am I speaking?  How do I feel about them?  Acting 101.
Steve Memel brings terms we are quite familiar with, “actor,” “performer,” “stage,” “role,” “promotion,” etc. to other industries, noting you don’t have to be in the entertainment industry to have strong performers in your department, stages of product development, promotions (in career “stages,” or of a product/service).
Voiceover is a platform for acting.  Just like film, television or theatre, it has certain technical aspects unique to that platform in which you must be proficient in order to be successful, but in the end, you are an actor.  Even if you claim, “I was never an actor.  I did radio for thirty years.”  I will contend you are an actor, and you performed many roles, following the fundamental rules of acting, whether intentional or not.  Otherwise, you would not have been believable enough to have been kept around for so long.
You can’t be successful in voiceover without knowing how to act, and the better actor you become, the more you enhance your voiceover ability.  However, even the best actors in the world cannot be successful in voiceover, until they commit to learning how to believably convey their character (including seemingly benign roles as “pitchman for brand X”) in this medium.
In that same vein, no actor can be at a peak performance level, whether on stage, on camera, or behind-then-mike without training.  While voiceover-specific training is vital, we all can learn much from participating in regular classes and workshops from the other acting disciplines, as well as vocal coaches and improvisation.
And none of us can perform well without our health.  I urge everyone here to evaluate your diet, strength, aerobic and lifestyle regimen.  It’s not just about “hydration.”  At the very basic level, for voiceover, we are all machines, converting potential energy (breath) into kinetic energy (vibration of vocal cords).  We need to keep it tip-top shape for peak efficiency.
Scott J. Smith