The Voice Over Self Direction App 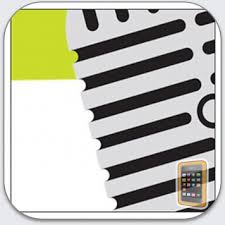 ‘Still decompressing from my time at VOICE2014. What a wonderful event for information, networking, education, and… just seeing people in person that you know from online!

My participation in the event reached a crescendo as a participant in a panel hosted by Paul Pape.  Honestly,  I have no idea how I ended up in this prestigious line-up, but I tried to act the part.  🙂

Just check out the pic below with the star-studded members of the panel.  Paul’s intention was to break the barrier in the dialogue over rates — union and otherwise — in relation to the P2P’s. 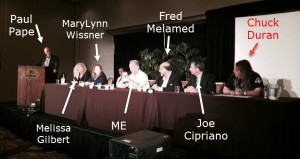 When I wasn’t dwelling on my own feelings of insufficiency, I found myself pretty engrossed by the comments of all the other panelists.  Although I knew most of them, I was most unfamiliar with Mary Lynn Wissner.  I had watched her

interview with Chuck and Stacey on VO Buzz Weekly, but never met her personally.  Wissner is a casting director, a coach, and an experienced advocate for our business.

She conducts workshops for voice actors from the perspective of a casting director, and began to notice a commonality.

She told me:  “…I have found in the 25+ years that I have been casting, the same 5 basic directions always come up in the specs/directions for casting.  So, I have taught these 5 directions to talent.  Talent would always say, “I wish I could have you

in the booth with me…”  and I thought, well, let’s make an app for that! (and it’s a whole lot cheaper than a private lesson with me!!)”

That app is The Voice Over Self Direction App – available for iOS (iPhone & iPad), and for Android.  It retails for $4.99.

To my mind, this app is more than worth that investment.  Wissner went on to tell me: “…If you look at the app, it breaks down the 5 most popular directions (for commercials), how to dissect each of those directions, trigger words and techniques to get into the directions and then “add on emotions/triggers” that help you change up that direction slightly, in order to show the casting director/producer that you have a range.  The app also shows sample scripts and audio clips on each of those directions, as well as, a list of “add on emotions/triggers”…”

The app comes with an explanation of how to use it, script samples, audio samples, and most importantly, fleshes-out the five directions Wissner claims are at the heart of just about every voiceover challenge.

Wissner is open for sessions with you.  Undoubtedly that would be money well spent… but why not give this relatively inexpensive app a try first?  It distills the essence of her direction into one concise training tool on your smartphone or tablet — handy as a reference point when you’re in front of the mic.