What Are You Worth? 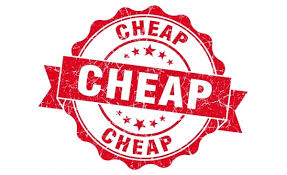 Do you want your reputation associated with the word “cheap”?
Personally, I always thought the word “inexpensive” had a less abrasive feel to it.

Regardless, I don’t like either word associated with my voice-over business nor my reputation.

At the end of last week, a number of threads on Voice Over forums exploded with furor over the move by The Voice Realm to associate members profiles from its online voice-matching service to promote ANOTHER of its online offerings.  The other offering is called cheapvoicetalentonline.com.  (ugh, there’s that word again: cheap).

As of the writing of this blog, that URL takes you directly to TheVoiceRealm.com.  The Voice Realm uses that term to re-direct seekers to its main site.  They’re also using it to beef-up their current running promotion as seen in the massive online news release service PR Web.

THAT Voice Realm announcement (dated Sunday, 7-13-14) claims to be offering $1 voice-overs during July.  Mind you, it’s a promotion for a drawing, and only one lucky client will win that $1 voice-over.  I just shudder at being associated with a “$1 VoiceOver” advertisement.  It’s so “Fiver”!

I’m all for self-promotion… in fact I plan to do quite a bit of it later this month as I publicize the release of my new book.

But I’m not for devaluing our profession.

This is a stance we all must take at some point…and it’s basically a judgement of how we view our own worth.  I’ve read and participated in a good many threads in online VO forums pertaining to setting VO rates.  Heck, I administer a LinkedIn group of that name. I’ve heard the arguments, and can sympathize with some of the sentiments on both sides.

But this is where I draw the line.  Apparently a number of my peers agree with me.  If you’re a member of the Voice-Over Friends Facebook Group, then I encourage you to read through the issue, first raised by my

fellow friend in VO blogging:  Marc Scott.   If you do not belong to that online community, just write me at [email protected], and I’ll send you an invitation.

In the meantime I suggest you go to Marc’s blog today and read his well-composed article: “Protecting My Brand: Why I Deleted my Voice Realm Account”.  I concur with Marc’s arguments, and suggest we all do as his blog compels us to.

Thanks Marc, for making the timely discovery, and for so intelligently arguing that we take action.