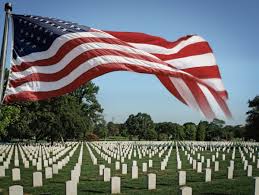 (formerly Decoration Day)
…originated after the Civil War to commemorate
the Union and Confederate soldiers who died
in that conflict.
All were Americans.

Each year at Arlington National Cemetery,
the number of soldiers interred grows,
signifying an honorable history of those
who gave all to something they believed in:
The United States of America

Those of us who enjoy the country  for which
they sacrificed their lives, can honor them
by not taking for granted the incredible
nation in which we live.