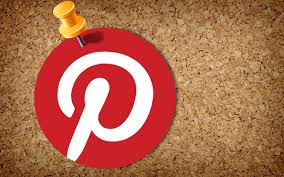 “It’s just for people to share recipes.”
“I’m not looking to buy shoes today!”
“Who cares about what Jennifer Lawrence wore to the Oscars.”

OK, yes, Pinterest is guilty of all those stereotypical statements, and yes, it’s dominated by the female gender, the same gender that make hires for voice-actors, are agents, and handle production accounts.  Pinterest should be part of your general Social Media marketing plan, and it’s not tough.

Pinterest DOES rely heavily on images, though, so get out your favorite head-shot or logo design, and get ready to use it with the demo you have posted on SoundCloud.  It’s easy to just click on the pencil icon next to the SoundCloud player to edit your pic. You’ll also want to acquire the Pinterest Bookmarklet for your browser.

To Pin a sound, just browse to your the SoundCloud file you want to post, and either copy the URL from that page into Pinterest, or click the PinIt bookmarklet from the SoundCloud page. 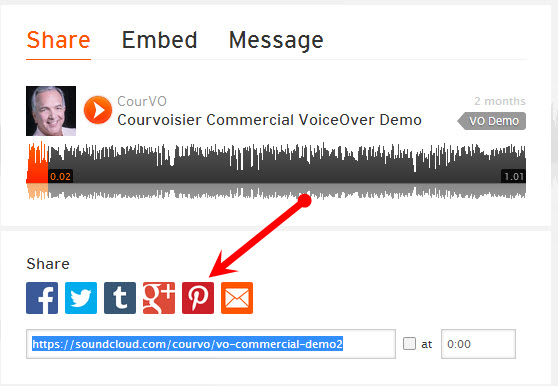 There’s a third way too.  Click on the “share’ button next to your SoundCloud audiofile, and in the box that pops up, you can see all the social media share icons…including FaceBook, Twitter, G+, and Tumblr.  Click Pinterest, and choose the category you’d like to assign it to.  When it displays (that’s me in the middle of all those recipes below), a “play” arrow pops up right from the main Pinterest screen.  It couldn’t be easier for someone to listen. 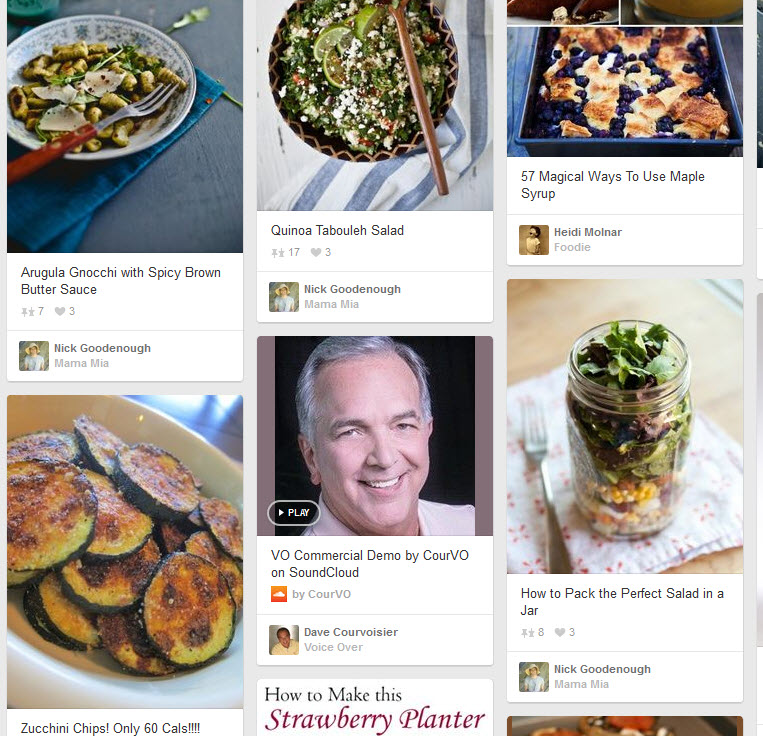 On Pinterest, you follow, get followed, and share stuff just like the other popular social networks.  Once you get a few followers, you’ll be surprised how quickly the stuff you pin gets “re-pinned”…maybe to someone who’s looking for a voice talent!