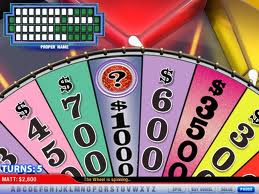 Most of us don’t realize how far and wide the profession of voice acting ranges until we brush up against some new sector in the business.

Let me tell you a little back-tale to get where I’m going.

“Wheel of Fortune and Jeopardy” is one of the most lucrative hours of TV programming EVAR…and now one of the longest-lasting: 30+ years.  TV stations grasp and claw for the right to even just BID for the programs when they comes up on the market.  Such a thing happened last year in the Las Vegas TV market.

The NBC affiliate in this town released their hold on Wheel and Jeopardy last year,  and when the smoke cleared, the CBS station won the bidding war (that’s the station I work for).  Now, many months later, as we get close to it’s premiere at our station, we are anticipating being the beneficiary of that cash cow AND something else.

The two programs as a block are so popular that they actually boost the ratings of the programs that come before and after it.  In our case, that would be the 6 o’clock news (which I anchor).  Gee, we as a TV station would want to promote that wouldn’t we?…the fact that when “Wheel” and Jeopardy are over, we’ve got this award-winning newscast coming on right afterwards, and you are NOT going to want to touch that dial!!

And so it is that I find myself this weekend at the live Wheel of Fortune show-tapings at the Venetian in Las Vegas.  The whole

on-air team is there to “be present”, to meet our audience, to bask in the glow of “Wheel” greatness, and to associate our news product with this winning show.

The entire “Wheel” set is packed-up lock, stock, and barrel into 5 semi’s and re-assembled in a convention center hall in all it’s colorful show-biz adornments.  As an anchor team of three, my colleagues and I are given a few minutes just before the show starts to speak to the audience, and talk about our news program.

…and THIS is where the interesting show business sector of voice-acting comes in.

The man introducing us to the audience…in fact, the man who has been warming-up the audience all this time — the official “Wheel” announcer — is a man on fire… a man with an incredible “announcer’s voice”, and (it turns out) a lot of personality, energy, and wit.

His name is Jim Thornton.  Recognize the name?  If you are at all tuned-in to Southern California radio, you’ve probably heard the name.  Here’s Jim’s resume, and pay special attention to the last paragraph.

One of the most popular and distinctive voices in Southern California, Thornton has been a part of KNX 1070 Newsradio since 1985.  He began with the radio network by providing traffic reports through the syndicated traffic service, “Metro Traffic.” He later became a full-time traffic reporter during morning drive for both KNX and CBS2 News, before taking on his most recent role as host of the afternoon drive newscast in January 2005.  He can also be seen hosting pledge drives on Southern California’s KCET, community television station.

In his hometown of Huntington, W. Va., Thornton began his broadcast career in 1983 at WOWK-TV while attending Marshall University. A year later, he moved to California and by 1989, he had his own morning show on Magic 94.3FM in the San Fernando Valley.  In 1992, Thornton became a “Hot Country” disc jockey for Westwood One Radio Networks, hosting live music from coast to coast. From 1995 to 1999, he was the voice of Channel 13, KCOP-TV, in Los Angeles.

Over the course of his career, Thornton has received numerous broadcasting awards including the Edward R. Murrow award, Golden Mike awards and an Emmy.  He also lent his voice to the 2011 Oscar-Nominated Short Animated Film, “Let’s Pollute.”

Here’s a guy who has really developed his career and his craft in voice-acting.  Who says “announcing” is old hat?