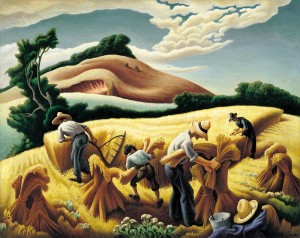 On the farm where I grew up in Illinois, some of my most enduring memories were those of putting up hay.  All the farmers from around the area would volunteer their time to help every other farmer for this big-labor-intensive duty.  When it was my Dad’s turn to put up the hay-bales, all the other dads from all the other farms came over… and by the end of the day, the job was done.

Of course all the moms came over too, and brought all their kids, and when the work was done, there was a big feed.  All-in-all, the event made for a big spectacle to a young farm kid.

That ethic surfaces in me when someone asks for help requiring physical labor.  Luckily, I’m still willing and able.

So when a friend here in Las Vegas — one of the  proud, newly-minted group of “Vegas Voicers” —  asked for a hand in putting up his new recording booth, I jumped in.

Much like putting up hay, birthing a booth turned out to be heavy labor.  Only one other kindred soul showed-up to help.  But, no worries, that turned-out to be enough.

Here’s why the job was real labor:  the recording booth was expertly made by Gretch-Ken Industries, Inc.  Solid raw materials, expertly manufactured with a double-walled design to be assembled to a tight fit.  This particular booth has built-in airflow, and was made to custom specs.  Suh-Weet!  (Gretch-Ken was highly recommended to my friend by everybody’s favorite audio consultant:  George Whittam).

Each panel was man-handled from it’s shipment drop-off point in the garage, through the front door, up about 15 steps to the second floor, and 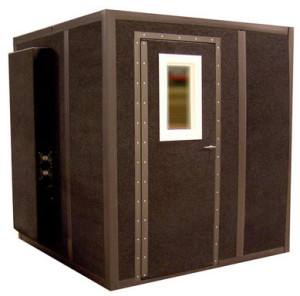 into my friend’s studio for final construction.  Panel by panel, with frequent pauses for liquid replenishment in the 100° Vegas heat, we muscled the pieces into place.

I’m a little sore as a result, but for some reason, I’ve been smiling ever since. For just a moment, there, as I was sweating up the stairs… hefting a heavy double-thick wall,  I thought I caught a whiff of clover-hay, and felt the well-worn sense of community.