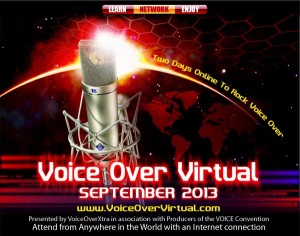 For months, now…a fresh idea has been hatching.  Maybe it’s been a year?

Regardless…if it’s worth doing, it’s worth doing right, and John Florian is a perfectionist.  The founder and force behind VoiceOverXtra has been sharing with me during all of 2012 his idea to do a voice over conference…VIRTUALLY.

Now it’s happening.  At least, it’s scheduled, and already a lot of time and planning has gone into it thus far.

This is a new idea. The technology to make it happen is certainly in place.  The question is:  will people attend?  We believe so, and we invite you to get engaged with VOV.

THE TIME IS RIGHT

Florian  has done his homework.  He’s also brought together a fine team, including Dan Lenard, Graeme Spicer, Denise Chamberlain, myself, James Alburger, Penny Abshire, Elizabeth Holmes, Martha Kahn and others.  EVERY DAY progress is being made at bringing together a voice over conference that you can attend through an online connection.

Some of the events and content will be live…some of it will be prepared ahead of time.  Trainers, coaches, and instructors will be live online at times during the event.  There will be chat rooms, live virtual “halls” where you’ll attend a seminar with others.  Vendors will be present.  There’s a registration lobby, an exhibit hall, lounges to talk, side meeting rooms.  It has the feel of a convention center.  People can live audition, talk technology, be sponsors, and talk to agents.  It’s interactive.  It’s packed.  It’s virtual, and it’s ground-breaking.  A lot of this is being decided-upon as we move through this new territory.

HOW WE GOT HERE

Let’s consider the ground that’s been broken thus far:  in 2007 James and Penney (with the partnership of Frank Frederick) launched VOICE (Voice Over International Creative Experience).  3 more conferences followed in the years since.  Then, in 2010, FaffCon was born.  It broke creatively from a traditional “conference”, and became the first VO UNconference.

Now comes another iteration of the voice over meet-up….The VIRTUAL conference.  While the venue and structure in each situation is different, you will find much of the same excellent content, coaches, personalities, and attendees at any of these get-togethers.  Voice actors are a tight community, willing to share, pay forward, support and encourage.  THAT vein running through all of these, is recognizable and familiar.

I commend John for his vision, his work, and his determination to make this happen.  Doing ANYTHING this big for a “first annual” is tough.  There will be a couple of hiccups probably, and with a very modest buy-in…no one is making much money on this thing.  We just believe in it, and we believe the voice over culture has matured to the point where it’s time.  We deserve this as the community of voice actors move forward in the sophistication of our business.

Watch for continual updates here and on VoiceOverXtra.  We’ll be making a splash, and posting plenty of notices.  I hope you’ll consider supporting us!