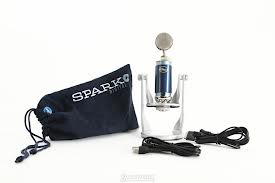 Blue Microphone innovates…a lot.  Lately, they’ve been producing a new model every few months.  They’ve chose a great niche…mostly USB mics, although that’s not all they do.

At CES 2012, I visited their booth, and drooled over the Blue Spark Digital.  The mic promised to record right from iOS devices, and from any USB port…no extra power source needed.  At first, they promised delivery in “the Spring”.  But Spring grew into Summer, and into Fall, and still no release.

Finally just prior to the Christmas season, I started seeing mention of it, and saw the listings in online equipment vendors.  I had the discretionary funds to get one ($200), so I ordered from the neighborhood Guitar Center store, and in a couple of days had it in my hands.  The craftsmanship on the product is excellent.  It feels solid…heavy.

I was excited to break it out of the box and plug in the 30-pin connector to my 3rd-gen iPad.  The manual that comes with the device says:  “…Plug in your Spark Digital Microphone using the provided y-cable with the 30-pin connector.  Within a few seconds, the microphone will be recognized by the iPad or iPhone and be powered up…”

That means the string of blue lights on the body of the mic would light up.

I tried various things…but no go.  Luckily I know the product spokesperson for Blue, and she was most accommodating in sending a replacement model.  When it arrived, that one acted similarly until she told me in an email that I had to be in a recording app…and hit “record” to actuate the mic.  It makes sense…and saves on battery…and yes, that did work.  Now it lights up every time I just plug it in.  I’m almost sure I tried that with the first one I got from Guitar Center…but I could be wrong.  I wish it was stated in the directions that you need to open up an app and initiate a recording to get the mic to actuate.

I explain all that to say Blue has worked hard to make sure this mic WORKS.  They delayed release for that very reason, and I give them high marks for delivering a device lives up to the promise.  Never mind my possible human error…and the missing verbiage in the manual… this thing is cool!

So now I have a Blue Spark Digital that works great.  It’s a handsome package…coming with it’s own shock-mount stand, and both sets of  Y-connectors.  One for USB (with headphone jack), the other with 30-pin connector (and headphone jack).  It’s solid, and reliable.

The only receptacle on the bottom of the mic is a mini-USB port.The box also includes a thick and luxuriously padded drawstring bag with compartments for the mic, stand, and cords.  It’s handy.

I simultaneously recorded a few lines using the Spark and my TLM103. George Whittam would probably say this is not the most scientific way to do an equal evaluation, but it’s a fairly good comparative representation, I think.

I plugged the Spark into my 3rd-gen iPad, and recorded on Twisted Wave.  My TLM103 was run through my Steinberg CI2 USB interface and into my Adobe Audition 6.0 DAW.  The CI2 has a modest pre-amp.  No other processing or effects were used.

I did amplify the signal on the Twisted Wave recording a little to match it to the AA6.0 recording, but otherwise there is no tampering with these .wav files.

The Blue Spark Digital may be the best mobile solution for recording away from your studio, given that you have an iOS device with a 30-pin connector.  ‘Works with the iPhone too.

Maybe comparing to the TLM is not fair…but it is brutally honest.  I think the Spark holds up well, actually.  Let me know what you think.