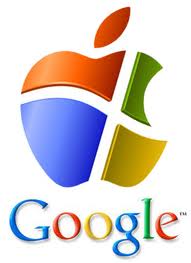 In the global scheme of things, these three tech giants keep us ahead of the also-rans and the copycats.

Everyone who is a voice actor uses products from one, two, or all of these tech giants.

Apple was recently ranked the most valuable corporation in the world.  Google is the sleeping giant EVERYONE is watching, and Microsoft can never be written off…it has HUGE reserves, and plenty of drive yet.

These three corporate behemoths are partners and competitors, wary adversaries, and the liasons between any two of them against the other one are many and varied.  At one point when Apple was down, Microsoft invested a sizeable sum of money in Steve Job’s company.  I’m sure they got their ROI.

Google continues to impress me with its innovation, even though Thursday the company reported a 20% drop in profits from the year before (their revenue rose, however…45%!).

A LinkedIn colleague — John Kennedy — sent me a handy guide to some of Google’s latest offerings, and I want to pass it on to you:

3. If you use Gmail, you can enrich your contact profiles on the right inside of Gmail: http://goo.gl/D7L8a

5. This one has nothing to do with business, but great for family member (Where was this when my kids were driving my cars?) safety: This App Turns Smartphones Into Safe Driving Tools http://goo.gl/QUsgE