Ya think after you’ve been around a while, you kinda know what’s out there…the equipment, the coaches, the agents, the producers, the software, the hardware.

Sometimes a mic or pre-amp comes across my radar that I missed before. but for the most part when people talk about dis ‘n’ dat pertaining to voice-acting, I’ve at least heard of it.

In past years and months, I’ve linked to prodigious lists of DAW’s (digital audio workstations).

But the other day, hanging around an AudioBook narators’ forum, I heard of a new one…one that met approval from the narrators, ’cause it had special features that made punch ‘n’ roll a cinch.

For freelancers like us, Reaper offers a personal single-use license for $60.  Not bad for a software package with this many features. 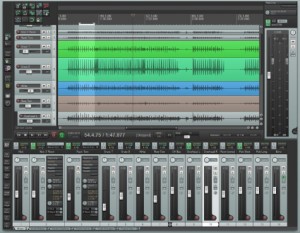 This DAW is not new on the scene, apparently (grrr).  The screen is customizable, and the software comes with full documentation and help files, resource guides, and manual.  The current version was just released in August 2012.

I’ve only just downloaded and installed it.  The only glitch:  the automated installation process failed to return an email to me with my license number.  I’ve already emailed support.  🙂

If you’ve used Reaper before, can you give us a quick word about it’s pros and cons?