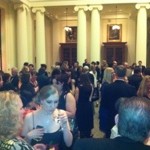 In the big house of possible avocations in this world, voice acting takes up almost no space at all…and within that small closet of voice careers, the audiobook narrator is perhaps the most scarce – tucked in behind the scarves and used umbrellas in the back.

Maybe that’s why, when ANYONE shows a little appreciation our way, we become effusive.

Among the recipients: some worthy and expected shoe-ins, a few genuinely-recognizeable movie actors, and the occasional surprise first-nominee or self-narrating author.

On the whole, the event was an auspicious affair. Proud audio publishers like Tantor, Blackstone, and Oasis took their place in the line of worthy winners. A special lifetime achievement award went to Blackstone’s founder, Craig Blackstone.

The food and drink flowed freely as did the conversation.

Simon Vance, twice a winner on this night, sported no fewer than four nominee medals around his neck. What a great year for him! 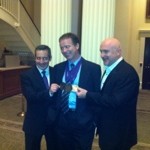 I’m accustomed to attending these kinds of black-tie affairs almost weekly in my home town of Las Vegas… Often as an Emcee or sometimes an honoree. In the Big Apple though, and as a relative beginner in the audiobook narrator field, I enjoyed near-unknown status…and as such reveled in the anonymity and newness of it.

Like most all voice-actors of any stripe, though, audiobook narrators are a friendly, accepting and supportive lot. I saw old friends and made new ones, but never felt out-of-place.

I’d love to return in some future year with one of those nominee medals around MY neck.