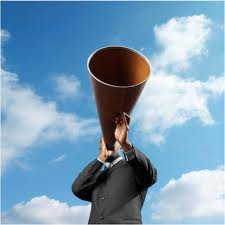 Subtitle:  The SECOND most transparent blog I’ve ever written

[Prologue: In my closet, I have a special section for storing thin ties, Angel’s Flight pants, and Nehru jackets.  As fashion trends go… they’ll be back.  I’m sure they’ll come back.]

Last night, for the thousandth time I noticed that the directions for the audition I’m about to record say:  “NO ANNOUNCERS”  –or– “NO announcer types”  –or– don’t be “announcer-y”, as in: “broadcaster-type”.

And for the thousandth time I sigh, and shake my head in frustration and disgust.

1)     The best jobs in voice-over land (aside from movie trailers) come from Radio and TV…be they commercial spots, Network promos, or Imaging and accompanying video programs. In other words your voice ends up in a BROADCAST in some way.

2)  A significant portion (70%?…80%?) of today’s voice over professionals trace their roots to broadcasting (usually radio).

3)  ANNOUNCING is an incredibly effective and money-making approach to conveying  information…bringing $Billions$ to the pockets of advertisers, clients, talent, broadcast outlets, agents, unions, and corporations.  This has been true for over 50 years  (and persists in the present day:  Ask Cliff Zellman about his best-paying car dealership clients).

…I ask you, is ANNOUNCING the definitive VO poison pill?… the veritable modern-day version of Adolph Hitler in voice acting?  Is it ’cause we’re dog-tired of it?  Is it an affront to our ears?  Don’t even begin to tell me it’s a fake or contrived way of talking — it is — but read #3 above.

A couple of weeks ago at FaffCon4, I was having a nice conversation in the hallway with a welcome addition to the usual mix of voice actors:  she was a talent/casting agent who had many words of wisdom for the attendees.  When I finally got around to formally introducing myself and explaining the various hats I wore, she broke in and said:  “…I could tell you were in News…you have that ‘sound’…that ‘cadence’ “.  Implicit in her statement was a sort of perceived sadness…a regret that unfortunately, I might not ever be able rise above the handicap and become a VO success.  Remember, this was casual conversation.  Apparently the oodles of dollars I’ve spent with the best VO coaches to lose my “announcer accent” has failed me in the most innocent way.

Just last week, I had an email exchange with a top voice actor whom you all know.  Our conversation was concerning another topic entirely, but as an aside, his admonition to me was to remove any and all references to “broadcasting” from my branding materials.  In other words, implicit in the word “broadcaster” is “announcer”, and let’s face it: that’s…well…DEATH in Voice Over circles, right?  (apparently a broadcast Emmy means nothing to potential VO clients?).

Don’t misconstrue this rant as sour grapes. I’ve KNOWN this situation has existed for years…I entered voice overs realizing full well the third-world status of “announcers”… all the admonitions not to “puke” into the mic, etc.   I can remember sitting with a highly-regarded TV consultant in the late 80’s as he coached me on how to be “conversational” in my news anchor delivery… so the announcer hate-mongering has been going on for many many years.

….and yet it survives.  How often have you taken phone patch direction from a client who — at the outset — stated he/she did NOT want an announcer-y delivery, but when it was all said-and-done, ended up being exactly that?

How often did you work long and hard to cut an audition using all the best interpretive and “converational” touchy-feely voice-over talents you could muster, only to find that when you hear the spot on the air — with the guy who WON the audition — the final cut sounds like an announcer?

Certainly there IS a place for the non-announcer-y read.  Ask Doug Turkel — The Un-nouncer — who has made a brilliant branding cam

…and besides, doesn’t the prestige of labeling yourself as an “Actor” rather than an “announcer” carry a much greater cachet?  Look into the eyes of the man in this picture, and say in a haughty British accent:  “…after all…I’m an ACTOR!…”

As of today, my website says:  “Award winning TALENT,” (not broadcaster).  In fact, the CourVO.com home page has no mention of broadcast at all… now I’ve got “30 years of On-Cam experience”.

I say all this as Las Vegas’ 2nd-most attended convention on the yearly calendar (CES is first) convenes for a week-long conference:  The NAB (National Association of Broadcasters).

Voice Actor delivery vs. broadcast delivery….. ‘Can’t we all just get along?

Regardless, I’m keeping my broadcaster’s voice in special storage in the closet.  I know it’ll be back some day.  I just know it will come back.