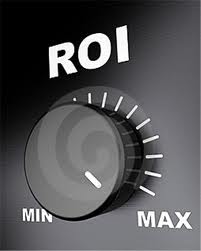 In the overbearing ocean of American acronyms, none has it’s place closer to the heart of a capitalist than ROI…Return On Investment.

Make no mistake, it’s an economic term in origin, in fact here’s the formula for the Arithmetic ROI (also known as Rate of Return).

There, now don’t you feel better?  So…get out there, and go get ’em tiger!

Those stat-crazy Wall Street folks certainly need to pay attention to the numbers…but us freelance peons are more interested in the less-regimented definition of ROI…the one that tells us whether the time we’re spending doing this or that is worth the effort for our VO business.  Here again, though, the default of doing your best at measuring and quantifying is of utmost importance.

For example, certainly any smart Voice talent should chart the hours she/he spends on social media per month v. the directly attributable deposits into the checking account.

…THERE ARE ALWAYS SOME EXCEPTIONS

Here are the grey areas, though (Soft ROI)©:

Sometimes, you have to go beyond the numbers, or even find a substitute when no numbers are available.

If you look up from your monitor after wearily perusing the latest listings on V123, and you can’t face ONE. MORE. POSTING.  Maybe it’s time to try something else.  What’s your Soft ROI on that?

Does common sense tell you cold calling does not fit with your basic personality?  Soft ROI to the rescue.

Your agent hasn’t sent you a commercial script in months, but ACX is needing your services on at least two audiobooks.  Hmmm, my Soft ROI is talking!

I hate that Soft ROI is not quantifiable.  I wish I could put a gauge on matters of the heart.