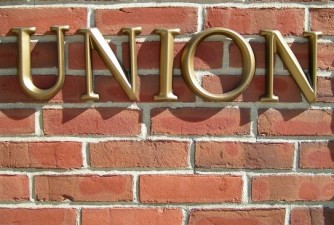 Did I mention I recently joined AFTRA?

I feel crappy about it…but that’s because my father is turning over in his grave.  I just know it.

He taught me that unions were bad business.  I mean… the lessons were  ingrained.  Drilled-in. Hereditary.

I didn’t really understand at the time.  I do now, and I respect his position, still.  However, I have my own reasons for choosing union, and it took me years to get there.

Broaching this topic is tantamount to inviting a Mac v. PC battle…a stand-off between conservatives and liberals…a classic debate between atheists and Evangelicals.  ‘Seems wherever earnest conversation about unions occurs in VO circles, the flame wars begin.

I won’t re-hash that now.

Instead, I’ll point out simply that unionS  (SAG and AFTRA) are on the cusp of a merger.  Union…not unions.

That has great appeal to me.  Maybe…just maybe…union leadership (here comes the commentary) will embrace the future instead of languishing in the past…find camaraderie instead of engaging in rancor…curry common sense, rather than the arcane.  Crap!  There I’ve gone and done it.  Now I’ll get flaming comments.

Hey CourVO…you’ve been in TV News for 30+ years…you mean you’ve never had to join?  Nope.  AND, I proudly live in a right-to-work state.

Here’s the strange thing.  I joined the union, and got a confirming email from my home office in Phoenix.  That’s it.

No FAQ file, no manual, no welcome letter, no explanation of benefits, no employee handbook, no nothin’.  I guess I’m just supposed to KNOW what to do now?

So, Dave, if you feel so bad about this decision, then why’d you join?

Well, I  mentioned the hope of optimism in the merger…and the other thing is this lingering belief that I’ll never break through some perceived barrier to the BIG VO money unless I join.  And speaking of money…that’s the 3rd reason:  joining AFTRA (the least expensive of the two unions) now shoe-horns me in to the merged union for the minimal fee with full rights and benefits to the NEW entity.  Yes, eventually, I’ll be paying a higher annual fee, but this gets me in on a dime (so-to-speak).

There are still lots of questions about that supposed full SAGAFTRA status.  For instance, if I were to consider declaring Fi-Core…how would that stand going into the merger?  The following FB thread is revealing:

OK, so I guess that settles that.

The rank ‘n’ file SAG and AFTRA members (that’s me!) vote on the merger before the end of the month.  I can only imagine the wrangling over rules and protocols will continue after the merger (and I think the merger WILL happen).

Interestingly, Steven Lowell of V123 posted a valuable analysis of union-contracted jobs made through Voice123.com.  First of all, there’s PLENTY of that sort of thing going on at this often-maligned P2P site, and secondly, Steven makes this observation:  “…the process to work online using union-contracted voice talent has not been innovated well enough to be called “simple”…”.

THIS singular observation is what I hope for the new Union.  Simplicity.  It may be a Pollyanna dream.  Institutions — like the federal gov’t — tend to get top-heavy and mired in its own verbiage and rules.  But for the new union to truly succeed in the 21st century, it’ can’t continue to do 20th century moves.

Please take the time to see Steven’s blog.  The data is displayed in easy-to-read pie charts, and makes a solid point.  http://voicethedream.wordpress.com/2012/02/15/going-there-and-taking-a-look-back-at-union-voice-work-on-voice123/