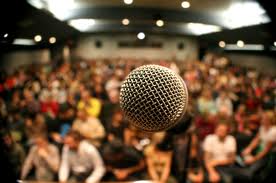 …said to be the #1 thing people fear most.  (It’s actually looking like a fool they fear, but Public Speaking tends to make you look foolish).

It never ceases to amaze me that people think I’d be a good public speaker because I’m a TV news anchor.  If they thought about it, they’d realize I spend 99.99% of my time in a mostly empty studio, looking at a camera, and there’s maybe 3-4 other people around.

DJ’s are subject to this same misconception, and so are voice-actors.  If you’re good at speaking, you must be good at public speaking. Right?

Ha!  I might be good at speaking, but I’m not at all used to seeing my audience stare back at me…only a camera lens or a microphone.

I’m not a joiner, so Toast Masters never appealed to me. They just seem too gung-ho to me.

Over time, I’ve learned to be good at public speaking, and since my audience usually knows and likes me, I have an advantage.  Confidence is key, but that’s a chicken-or-the-egg thing.  What I’ve come ’round to is that any audience is really expecting a show….and YOU are the entertainment.  So you have to come out of yourself and be a showman.

That’s the goal.  GETTING there takes attention to the details, preparation…maybe a slide show.

Take the time to read this delightful article by Silicon Valley entrepreneur Jason Freedman that I found on LifeHacker.

Without giving it away, two of his main points that I love:

VO Pro Peter O’Connell actually wrote eloquently about this back in 2008. Worth checking out!