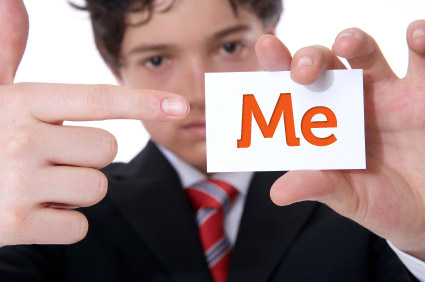 Voice Actors are a friendly sort, and Social Media is a great place to share.  In fact, the general consensus about posting on Social Networks is that you be honest, show your personal side, let people get to know you.

There’s that, and then there’s…well…a little bit of promotional marketing going on…all the way to hucksterism, and even bragging.

What’s constitutes frivolous posting?… what’s genuine?  When is it appropriate (if ever) to let people know about the work your doing, the auditions you’ve completed, the jobs ‘n’ the gigs your landing?  How often?

My interest was piqued when a dear friend in VO remarked that all this posting about jobs being landed was  making him a bit depressed ’cause lately…he hadn’t been getting ANYTHING.

I want to show you some samples of what I mean, and these are random.  I pass no judgment.  I’m not picking on anyone.  I’m not trying to say these comments are worthy or unworthy.
First, mostly from Twitter:

This stuff fascinates me for some reason.  I blog about it today (my 2nd or 3rd time on this topic) because I continue to delve into social media motivations.  It’s a new frontier.  The ebb and flow of the stream of consciousness of Twitter and FaceBook are defining new social etiquette.

I got to wondering about it enough that I actually posted a couple of informal surveys about the issue.  You may have seen them or participated in them.  One of them was on my VO Friends Facebook Group.  There wasn’t a huge population sample, but the outcome seemed fairly decisive. 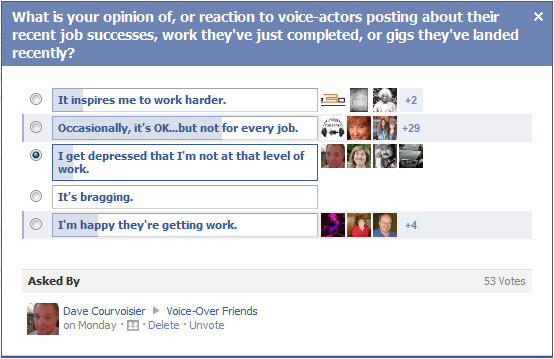 A total of 34 people voted for the opinion that is was occasionally OK to post about your recent job successes, but not for every job.  Many of the comments supported sentiments stating it was great to hear especially about remarkable odds overcome, outstanding gigs, and things you’ve worked very hard to achieve, but not every last audition you just uploaded.  You’ll notice all other options to choose from got only single-digit responses, and NO ONE thought it was bragging.

I also posted virtually the same survey on that lovely bastion of voice over friendliness and support called the VO-BB.  The results were much the same with one glaring exception.  A full 60% of the respondents supported response #2 (ocassionally OK) as did the FaceBook people.  But, the VO-BB people chalked up a 20% response to “it’s bragging” (9 votes out of 40).

If you’re not a VO-BBite, you may not understand the sense of community that exists there.  The level of sharing is exceptional, but fools are not suffered well…in the sense that you’d better have a thick skin, a healthy sense of reality, and be ready to hear genuinely honest and productive feedback.  As it should be.

I make no judgement about this discrepancy, preferring to lean on the fact that the vast majority of respondents in both polls are of the same mind:  Let us know when you land the national spot, the best agent in the country, and the gig you worked especially hard to enterprise on your own.  Step up proudly when you’ve gotten especially good attaboys from a grateful client…when a fellow VO referred you to a healthy paycheck, and when all your hard work in making your home studio JUST RIGHT got you some special kudos from your newest client.

The best advice I read among the comments — and it came up more than once — is that the most worthy comments about job success are those someone else makes about you because they know you, they understand you, they’re proud of you, and you deserve it.  Now those are good friends!

1) When NOT to mention work you’ve done.

2)  How to best use your successes to promote your work)