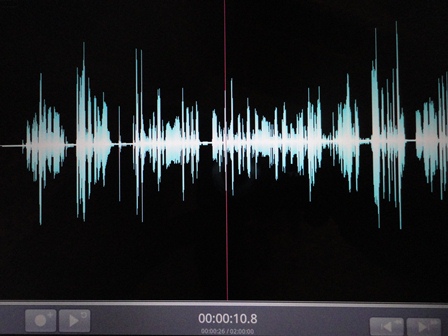 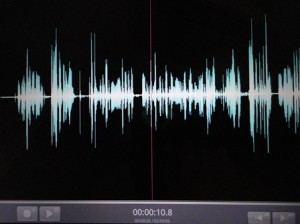 When LA-based Voice Talent pro and iPad recording apostle Beau Weaver was explaining the finer points of Twisted Wave last night on VoiceOverXtra, I was probably in a newscast somewhere and missed it.  I hope to see the re-run.

Quality audio recordings on tablet computers are likely to steal a sizeable niche of the recording market in the not-too-distant future.  I’ve been doing quite nicely with the original iPad, using a USB adapter, the AT2020 mic and the Twisted Wave app.  It requires only a little rigamarole and sounds great.

Recently, though, I acquired another tablet…an upstart contender by Motorola, called the XOOM, using the new Android Honeycomb operating system.  What’s nice about the XOOM is that it comes with a USB port (and HDMI), an SD card slot, and stereo speakers (to name a few features). 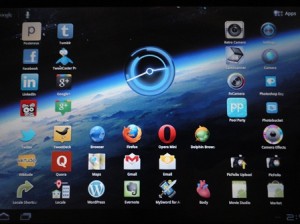 Android has the potential to be a serious challenger to iPad, and may take over the lead in the tablet market in a couple of years for various reasons that are beyond the scope of this article. (and I could be totally wrong).

Comparing the two, I find that the Android OS is maybe not as elegant in it’s presentation as the iPad, and the smaller sample of quality apps doesn’t quite match the offering in Steve Job’s app store, but Android is quickly gaining a devoted cadre of fans at least as enthusiastic as iPad followers.

For instance, the screen shot above is from the “Tape Machine” app for the XOOM.  It records in 44100Hz .wav files, and lets you convert to .mp3, OGG, FLAC, or AIFF.  The app also lets you choose from a sliding scale of 32kbps to 320kbps quality, allows editing of the wave form, and provides Normalizing, Gain, and fade-in/fade-out effects.

The resulting file can then be exported or shared in a number of ways. 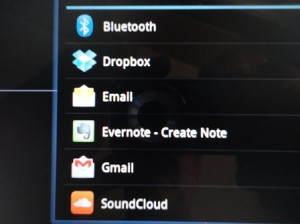 Send to a Bluetooth device, to DropBox, by email, to Evernote, Gmail, or upload to SoundCloud.

I promise, I’ll provide a sample of the sound of the recording yet this week.

Overall, though…that’s not a shabby feature-set. 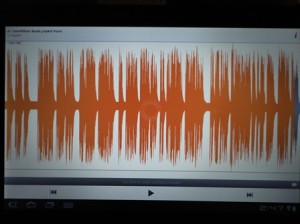 BTW, the SoundCloud app on the XOOM works like a champ, and allows for sharing also.

One final word about the XOOM and then I’ll stop.

If you read my blog yesterday, you can see how Google is moving.  Its pace is not likely to stop anytime soon.  Integration of Google functionality and apps will be integrated throughout their galaxy of products, many of them free (and that’s hard to resist).

Android is an open-source Google product, and already the Google+ app on the XOOM outshines any web-based app you can call up on the iPad or iPhone system (duh!…they’re competitors).

Look for the big G-Machine to continue to up the ante in this way.