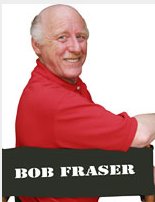 This time he's selling the wisdom of selling.

You'll understand when you read the e-mail I've re-printed below.  Bob's given me permission to repurpose his stuff in my blog.

I like to do that from time-to-time, 'cause Bob has such a refreshingly honest and unadorned approach to the realities of being in acting.

His message this time is one I personally needed to hear.  Having only worked for OTHERS all my life meant that being my own best promoter, businessman, marketer, and salesperson for ME is perhaps the hardest part of conducting a successful freelance voiceover business.  I can read the copy.  I can handle the technology.  Make cold calls?….now THAT'S a monumental challenge for me.

I don't say it as well or as thoroughly as Bob.  Please take the few minutes it'll cost you to read his letter below.

Why Most Actors Fail

Today's missive is going to upset a few of you. But, to be
blunt, I don't do this to make friends – I do this to help
SOME actors build successful careers.

As an actor who yearns for a professional career, you must
start with the knowledge that you are facing a locked door.

On the other side of that door is the career you've always
wanted – great projects, lots of work, recognition and your
choice of roles.

But the key that unlocks that door is all wrapped up in your
belief in yourself.

Because until you are convinced that you DESERVE the career
you want – until you BELIEVE in your product (YOU) – until
you are capable of recognizing REALITY, you will not do the
one thing that makes everything happen … which is to SELL!

If you read my posts, blogs and other writings, I'm sure you
have realized, by now, that I'm pretty darn aggressive about
selling my many acting career courses.

In fact, according to some, I'm "too damn pushy" and I sell
too much.

Now, I realize that there are a lot of actors out there who
don't like to be sold anything. Some actors get real huffy
when they think I'm treating them like 'customers.'

And heaven forbid I should ever be too "pushy" about selling
anything to them. After all, most actors are 'broke' – and I
should know that.

Behind this attitude towards sales and selling lies the reason
most actors are 'broke' – and the real reason that most actors
never have the successful career they say they want.

Here's what I mean: Unfortunately the great majority of actors
are simply unsure of their value – and, because of this, they
behave as if they will be 'unmasked' as untalented, unworthy,
untalented pretenders – who don't deserve consideration.

That's why a lot of actors 'undersell' themselves.

They opt for 'safe,' they 'hang back,' and most egregiously
they don't go 'all out' in the pursuit of their business.

They seem to believe that the 'soft sell' is the way to get
through that door. That all they have to do is show up – and
one day it will become obvious to the buyers that they are
deserving, talented, committed, and ready for success.

Of course, by underselling, 'hanging back' and generally acting
diffident, those kind of actors don't risk anything more than
being told 'no' – which they expect – as opposed to being told
they don't have what it takes to 'make it.'

That's what the anti-sales attitude is all about; avoiding the
risk of being totally rejected.

Of course, if you intend to be a professional paid actor, this
attitude is a disaster of epic proportions.

It's a behavior that is analogous to the kid selling candy in
front of the supermarket who starts his sales pitch like this:

"You wouldn't want to buy a dollar candy bar, would you?"

That approach almost guarantees you will say "no."

In fact your "no" is exactly what that kid is expecting. As a
result, the kid feels justified in his approach because now he
knows he was right about what to expect.

See, for that kid, being 'right' is more important than selling
you a candy bar.

The successful kid approaches things far differently: "You can
help a lot of kids improve their lives by purchasing just one
of my delicious candy bars – how many do you want?"

Sure, the second kid risks exactly the same rejection – the same
"no" – but believe me, she sells a lot more candy bars.

Look, selling is the most important component of success in
any business. Successful people know that they must sell and
that they must remain unconcerned about those who may find
their approach to business … "too damn pushy."

Since my main goal is to teach actors how to be successful in
our business – by showing them how to DO business – I believe
the most effective way is to show by example.

That's why I'm willing to risk the upset some actors feel when
I'm 'selling' them something. It's the reason I utilize what
some call the 'hard sell.' Because I know that approach is the
approach that WORKS.

It's precisely that approach that gets actors to professional
status – and eventually to the red carpet.

Everyone who 'makes it' in show business MUST be "pushy."

Make no mistake … every sale in show biz is a 'hard sell.'

That's the reason I continue using the so-called 'hard sell'
when I know that some actors just don't like it. I do it
that way for two reasons:

First, I know it works.

And secondly, when I first started, I observed the failure
rate actors faced – and realized that it was the 'undersell'
or 'soft sell' approach that was behind all those failures.

So I got aggressive. I focused on selling.

The result of that decision, some five decades ago – is that
I've been successful for a very long time in a business where
most people have a hard time even making a living.

To be blunt, I'm aggressive about advertising and selling my
products now because I know how much my stuff can be worth to
an actor whose REAL goal is to become a successful actor.

This is a business where putting yourself forward and 'closing'
those hard sales are the twin pillars of success. (And the only
way that is proven to work, year after year.)

Success in our business isn't about who is the most talented,
or who has the best training, or who loves acting the most.

The proof of that is something you've probably said to yourself
on more than one occasion.

I'm sure you've observed a lot of actors who might charitably
only be called 'talent challenged' and complained about their
successes. Or griped about some actress who keeps getting work
even though she never studied acting at all. Or you've looked
at some stars and wondered aloud why anyone would pay to see
them – since it is patently evident that they are terrible
actors.

Yet, there they are, on television, in movies, getting their
star in the sidewalk, working constantly, being the subject
of interviews, being sought after – and pretty much living
the dream you hold so dearly.

Because those actors understand that this is a business and
they focus their energies on selling and promoting themselves
– and most of them do it quite aggressively.

What I know is this: Once you get past the idea that you can
undersell yourself or engage in the soft sell approach and
succeed – after you've dispensed with the idea that talent,
training and love of craft will get you where you want to go
… that's when you'll be ready to go to work on the things
that DO matter:

You see, those actors who worry about 'bugging' the casting
directors, offending their sensitive artistic pals, and steer
clear of 'selling' themselves – are going to find themselves
standing on the wrong side of that door for a long time.

Only those actors who have confidence, believe in themselves
and SELL at every opportunity – have any hope of opening that
door

Of course, it doesn't happen by itself – you can't just think
these skills into existence … you WILL have to take action.

I've gotten a lot of emails asking me how You Must Act! is
different from all the other acting information that's 'out
there.'

The best explanation is this: Almost everything you have
learned about acting is about how to act. You Must Act! is
about how to become SUCCESSFUL professional actor.

That's why I call it an ACTING CAREER COURSE.

You Must Act! is a computer-based course that clarifies the
methods, techniques, strategies, and skills used by successful
actors – to build well-paying careers in the entertainment
industry.

And these are not the same old shopworn "tips" you've probably
seen all over the internet. This is vital information that,
according to Emmy Winner Robert Guillaume … "propels actors
to amazing and exciting results."

Tony Winner Rene Auberjonois (Star of Boston Legal, Star Trek,
M*A*S*H, The Patriot, and many others) had this to say …

"What an achievement! What a GOLD MINE of essential information.
Bravo!  It's the kind of stuff I wish had been available in one
package when I was stumbling around trying to get started."

You Must Act! works for actors of all ages – and all stages of
career development. In other words it can help you if you're
just getting started … or if you are in mid-career and your
booking rate is stalled.

I get lots of great comments from readers and users:

"What it contains is worth millions."

"I feel like the power is back in my hands."

"You Must Act has had a profound effect on my career. I cannot
thank you enough."

(You can read dozens of letters from actors all over the world
– who are thrilled with the results they've gotten from You Must
Act! – on the site.)

So, why not discover how good information, explicit success
techniques, no-nonsense, practical, step-by-step instructions
can put the power back into your hands. The power to actually
take effective action and dramatically improve your career.

If you MUST act … go to the site now, and check it out.

Have a splendid day and, as always …

You Must Act!
The #1 Virtual Acting CAREER Course
http://www.youmustact.com

Nail It! Delivering  The Hypnotic Audition
Taking Your Audition Skills to The Next Level
http://www.hypnoticaudition.com

The Agent Code – How To Get An Agent And How To Be Your
Own Agent In The Meantime
http://www.theagentcode.com

An Actor Works – The Professional Acting Career Lab
A weekend of change that gets actors working.
http://www.anactorworks.com