When the National Association of Broadcasters (NAB) convention is in Vegas, things just happen.  People show up.  Old friendships are rekindled.  People you don't even remember come up to you and want to know how your kids are.

I kid.  (no actually that DID happen Monday)

At any rate, I spend the better part of Monday morning browsing the exhibit show floor, and also did an interview in preparation for a story on NewMediaMinutes.com.

Here's a quick (and I mean quick) tour of part of the Main Hall show floor (shot with my FLIP video cam).

Inevitably, whenever I show up at at the registration booth, I seem to run into Joe Klein.  I knew Joe was coming, but the fact that twice, now, I've literally bumped into him in the registration line is more than a coincidence, although I'm not sure what it really IS.

I first met Joe at VOICE 2008.  He was a presenter there, and when we met, I found out he lives within driving distance in Arizona.  That means he can be in Vegas for this or that convention without too much hassle.  I met up with him, and in short order, James Alburger.  James is the mastermind behind the VOICE 2007 and 2008 conferences, writes the definitive book about Voice Acting (which you will find listed on my blog sidebar), and along with his sidekick, Penny Abshire, holds voice coaching classes around the country.

Even though I spent several hours with Joe today, I'm ashamed to say I did not get one pic of the two of us together. 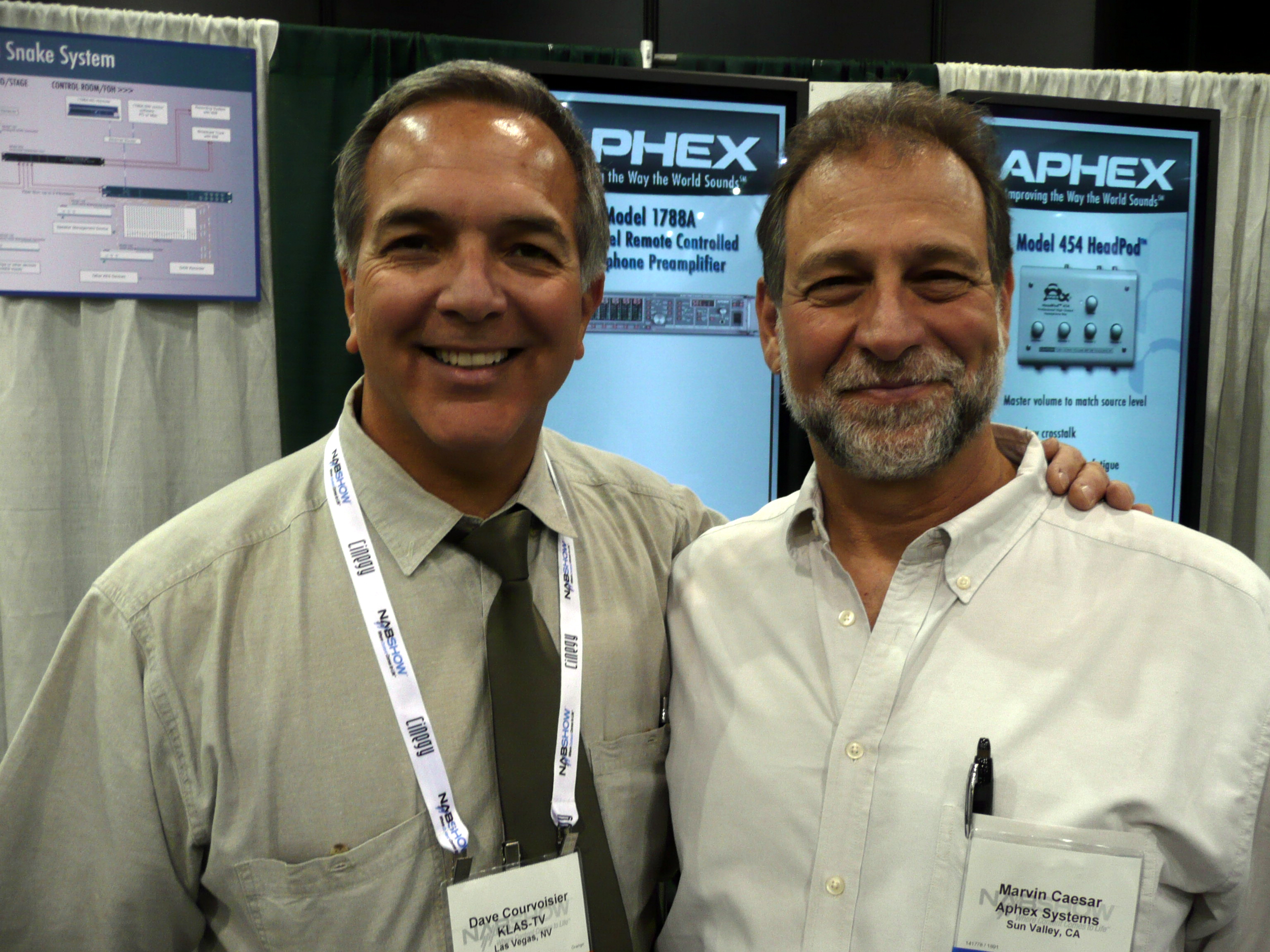 I do have these pics, though:

The first is me and Marvin Caesar, the Pres/CEO of Aphex Systems.  What a nice guy!  What a great product!  Joe got me hooked on the Aphex 230 Master Voice Channel, and the Aphex HeadPod 454.  I'm a believer in just about ANYTHING that comes out of Aphex.  We stood there talking, and low 'n' behold, up walks Andy Morrison of Buzzy's Recording Studio on Melrose in Los Angeles 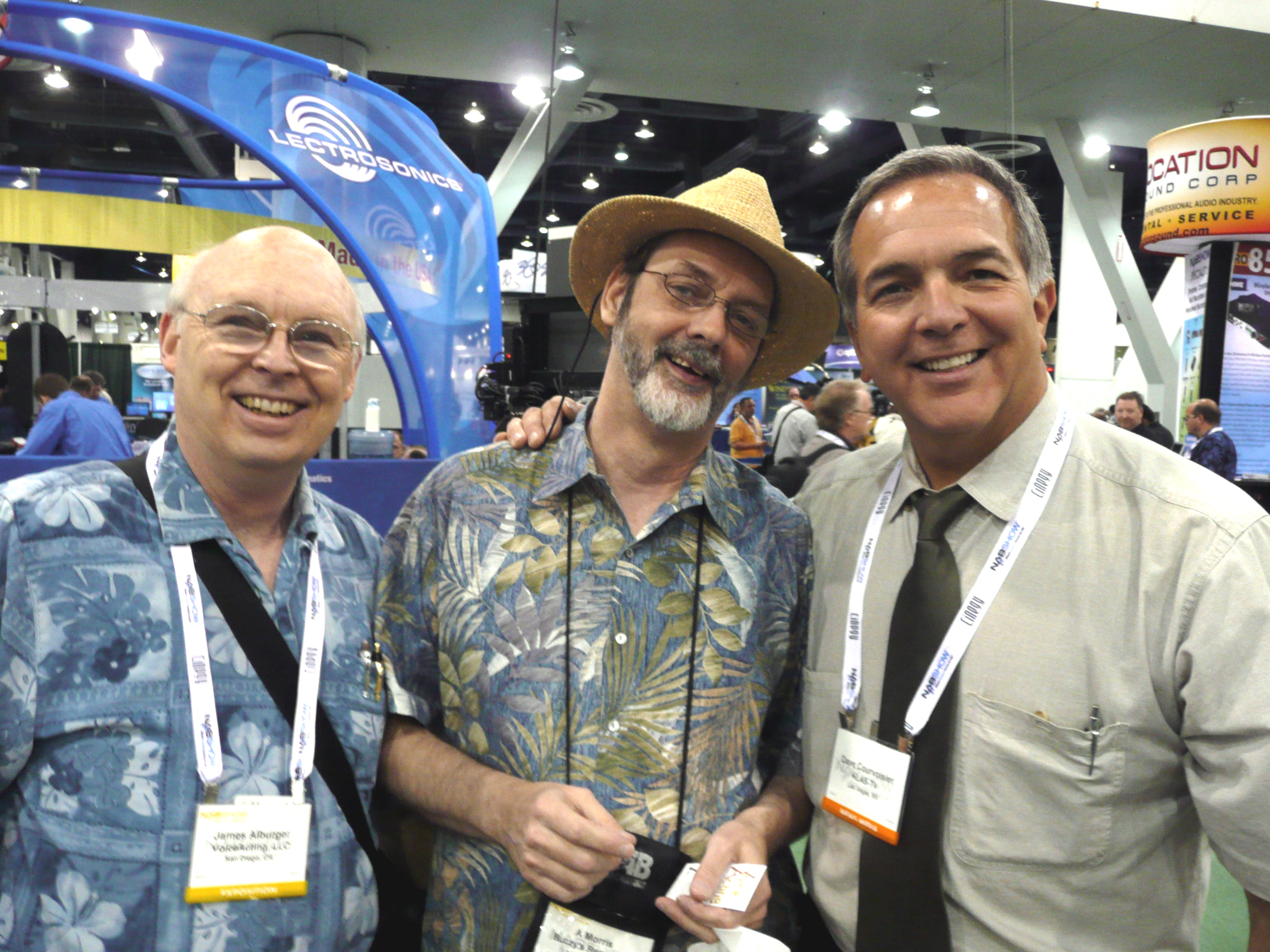 That's James on the left, Andy in the middle, and, well…you know.

You really have to visit Buzzy's Website to see the prestigious and historic relevance of the place (Mel Blanc!).

By 1pm I was done, and my dogs were tired.  Luckily, the TV station where I work (KLAS-TV) is only about 3 blocks from the Las Vegas Convention Center.  By the time I got there, I could actually begin my full workday!  Yay!  (Silly me, I'd absolutely forgotten about a public appearance I was supposed to make that day…'got another one Tuesday, though.)

NAB has certainly lost a little bit of the pizzazz from years past.  Just about everywhere you could pick up fragments of conversation that went something like:  "..yeah, so-and-so couldn't make it this year…you know:  the budget!"

While the broadcasting industry is iin a slow and steady decline, the vendors on the show floor seemed plenty busy.  Many of them are adapting to the realities of New Media, and digital online venues.  These days, it's either adapt and change, or perish.