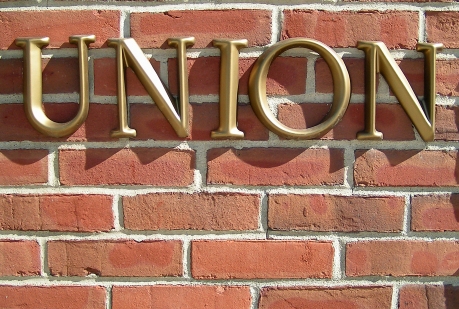 'Really great dialogue goin on over at the Yahoo VO forum on the issue of union v. non-union, and where Fi-Core's, or Financial Core's place is in the middle of all that.

In my mind, these debates resemble the Mac v. PC wars.  There is NO consensus, evar.  I've been vocal about my position on unions before, so I won't bore you.

Without naming names, here are some of the more salient points of the Yahoo VO forum discussion:
(each new color represents a different voice — these comments are arranged chronologically from oldest at the top to newest at the bottom)
____________________________

Bad times for not just the economy, but also the unions. Especially for this group…. in regards to SAG and AFTRA for voice-over. More of my fellow travelers who earned their union cards in VO are doing  ficore. And I can't blame them…. when there is less work for union talent and you have a family and mortgage to support, what does one do?

In a slowing economy, it's tempting to have a sale. But the problem
with discounting fees for VO work — and the inherent problem with
FiCore — is that once a client's paid the sale price, it's pretty darn
tough to get them back to a fair rate for the work we do. Let's stick together and not let the economy get our spirits — or our rates — down!

First, let's not confuse FiCore with Fire Sale. There's a lot of good
paying non-union work to be had out there. In fact, I've worked on
non-union projects that paid much more than union rates. FiCore is not
a reason to lower your standards. Going FiCore is a personal decision, and one that should be made only
after due consideration. There are pros and cons to either choice. Best
to make an informed choice by doing a bit of research first.
I will say that in the VO world, there are many Union folks who also do
non-union work… and assume that's ok. To each his own, but it does
violate the union rules. Once you are a full union member, you are not
allowed to do non-union work. Period. This includes pro-bono work for
organizations that may not be able to afford union contracts or rates.
For myself and many others, FiCore is a good choice… and an honest
one. I was not comfortable doing non-union work when I'd agreed to the
union's "no non-unoin" rule. FiCore is the only legal solution, and for
me, the only moral solution.

You must be a member of a union before opting for FiCore. So if you are currently non-union, you need to join and pay the initiation fee, then send the office a letter stating that you wish to change your status to fee paying non-member.

Going FiCore involves sending a letter to the union requesting FiCore
status. They will ask you to return your union card, and your next dues
statement will be adjusted to be (slightly) less. Yes, FiCore members
stil pay dues, and a portion of all union work still benefits the union. We should be clear on what "Financial Core" means. In a nutshell, it means you do not agree with how the union(s) spend
your dues money, and so are only willing to pay for the "Financial
Core" of what the unions provide (ie. negotiation, health, pension).
This lowers your dues, but only by a very small amount. In order to
accurately adjust dues, the unions would have to open their books to
let you see how dues are spent. To date this has not happened, and
probably will not until someone legally challenges the union.

The fact that what we do is such a subjective business always made the concept of a union hard to understand. We do not stand in line at the union hall and get the next job available. To have someone tell me I can't work in my field, that I should wait tables rather than work a non-union acting job is beyond ludicrous. I didn't want to work under the "table" or under an assumed name, so I opted for this way of being able to work the union jobs when they come up, converting non-union to union when possible and working non-union jobs – the combination of which allows me to work full-time in my craft.

All the way in or all the way out seems to be the most honest position.
If every AFTRA member was to go financial core, there would cease to be
ANY union. There would be no contracts and we'd ALL be working for a
whole lot less. Going ficore is, to my way of thinking, just like going
out with friends and splitting the bill equally, but always making sure
you order more than everyone else. Going ficore may be good for ONE,
but it weakens the whole.

Whatever individuals decide, it will never be an "all or nothing"
scenario. Some are comfortable doing only union work, some will do
non-union without going FiCore, and some will go FiCore.
Does FiCore weaken the union? Maybe. It's a debatable point. As with
any fair system, competition will either strengthen the union or weaken
it. If the union is not the best solution for its members, why should
it continue in its present form?
One important point: the decision to be Union or FiCore cannot be used
as a criteria in the casting of a union project. It is an unfair labor
practice and is a direct violation of federal labor law.

If every AFTRA member went financial core, there would still be a bunch of money coming into AFTRA – and perhaps it would/could/should evolve into something relevant for a performance field. If every FiCore performer opted completely out, then there wouldn't be nearly as much money. Depending on how many of us there are, it is possible that FiCore performers are what is holding the union together at the moment. I'd REALLY like to know the percentage.

The fairest thing to do is to pick one: union or non-union. Those who go FiCore remind me of the people who drive on the shoulder
when traffic is backed up. It's a "me" rather than a "we" approach.