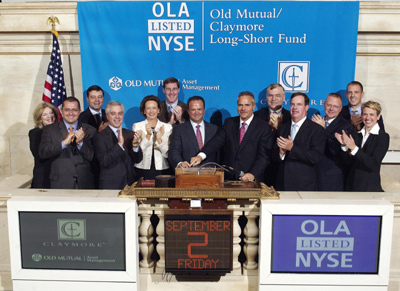 Don't you just hate that TV newscasts run the obligatory pictures every night with the natural sound of the New York Stock Exchange bell clanging?

That jarring jangling is starting to starting to sound a lot like funeral bagpipes, anymore:  "Another company died on Wall Street today….and a few more thousand investors' portfolios went 6 feet under," is what is hidden in the toll of the bells.

Honestly, I've never even come close to the fringe of the edge of the inkling that the US is REALLY in trouble…but now I'm starting to wonder what it would be like if martial law took over.

My crystal ball is clouded these days, and I'm an INCURABLE optimist, but folks…this is bad, and 2009 will be the moment that separates the weak from the strong.

There are two reasons I say this:
1) I read the news every day, and I can't EVER remember it being this bad DAY AFTER DAY.
2) I'm being personally effected…as is everybody.

KLAS-TV dropped about 20 positions in a cost-cutting move last September.  Managers thought it was deep enough to balance the losses in advertising.  They really had no idea that '09 would be as bad as it is, and maybe getting worse.

Broadcasters — solid journalists, ratings-proven talent, long-time top-notch writers…and many more are being let go right and left.  The country is awash in hard-working, talented people vying for a smaller and smaller list of available jobs.

Now, word that the station I work for is forced to trim some more.  Owners and managers don't want to.  We have a pretty tight-knit family here.  To save everyone's job, all of us will have to give up a little bit.  I don't think there's any major discussion or cries of "unfair!" here.  Everybody knows these are tough times.

Here's the REAL challenge most of us are having to wrap our brains around:  THINGS WILL NEVER RETURN TO THE SAME.

This would've been true with or without the recession/depression.  The Internet. and blogs, and New Media are all forcing traditional media to rethink the entire paradigm within which they operate.  Gone are bloated staffs, over-the-top salaries, and holier-than-thou attitudes.

You-Tube means everyone is THEIR OWN TV station.  Bloggers, and Twitter mavens prove time and again that traditional-media journalists are rarely the first to the scene of breaking news anymore.

Oh, we're not going away anytime soon.  I've often said in this blog that quality content, and excellence in writing and other creative efforts will ALWAYS have a place.

HOW FLEXIBLE ARE YOU?

But the medium will constantly change.  Can we change with it?  Are we agile enough to master the new technologies as they march by?

I look to guys like Mark Joyella (@standupkid on Twitter) for vision.  Mark is a multi-Emmy-Award-winning TV journalist who asked to leave his job at a successful station in Miami…partly because he is getting married…but also because he is preparing to embrace the new world, even though he knows not what it looks like.

I'm not happy about having my salary frozen, but the stark reality is:  I STILL HAVE A JOB when so many don't.  For that, I'm grateful.

I'd also like to take credit for having the prescience to have started a new simultaneous career vector several years ago that can now help fill the gap in lost pay.  Truth be told…I was just passionate about voice-acting, and still am.  I'm going to survive, and may even still have enough money left to send three girls through college, pay for the weddiings, AND find something left to retire with.