VO Newcomers, Do THIS 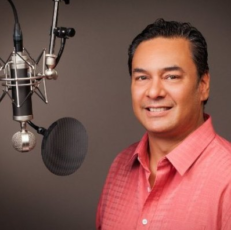 Greg James is getting started in voice-acting and is a member of WoVO.  We’ve had several conversations over recent months, and I’ve been impressed with his desire to “get it right”.  In trying to mentor him as best I could, I’ve come to respect the effort he’s making to maintain high standards in pricing his talent.

He’s given me the go-ahead to share an e-mail exchange he had with a prospective client – one that he found through his own marketing efforts.  You’ll see that below in chronological order.  Please notice how he maintains a straightforward business-like approach, always driving his value to the possible client.

‘Just received an email from a local production company, in which the contact asks:

“Thanks for sending your reel. What’s your rate for a 2min buyout? We typically pay $400.”

Now I don’t expect you to hold my hand, but I still have some “rookie jitters.”   I could just use a little quick guidance.

So….I’ve got the GVAA website open and am staring at their nice newly refreshed rate sheet.   If I’ve been paying close attention, it seems to me that:

I’m not agreeing to anything until I ask her – nicely – a few questions and get a better understanding of things.

Am I on the right track here?  Anything I forgot?  I’m trying to get into the practice of proper rate negotiation.

[I encouraged him that he was asking the right questions, and to just get clarity on what (if any) digital streams this may appear on.  If YouTube… he might ask for how they’re keeping metrics on that, and suggested that he get a %-age if views rise above 10,000.] –courvo

Hey Dave –
Here’s the latest.
The response I sent her:

Thanks for your reply.
On rates, it would be helpful if I could get some clarification on a few items before I quote a number.
First, is the buy-out in perpetuity?
I also like to get some understanding of usage.  Do you have a particular kind of project in mind?  I’m assuming that two minutes probably means one of your short-form commercials.  Could there possibly be some digital streams involved (social media, YouTube, etc.)?

Her response to that:

Hi Greg,
Our rates are for a 2min (short form commercial) buyout. My clients use the commercials on national and international cable TV, social media, web page etc.
I hope that helps.

My gut feeling, between you and me, is that this is still way too broad and scatter-shot.  I see lots of potential problems with “national and international” TV usage, not to mention creeping internet usage.   What happens if they pay me $400 and then I see this damn thing all over TV across the U.S. for the next year?
Unless you have another suggestion, I think I’m going to calmly and diplomatically explain that my rates are contingent upon use.  I’ll review the GVAA page again, and may even consider referring her to that, to introduce the notion of “industry standards.”   I’m as eager as anyone else to get paid, but I don’t want to be short-changed by someone who might run my work all over the web AND on national and international TV.
If nothing else, I will take this to its logical end, and get in some good practice on rate discussions.

[after asking if he’d heard back from the possible client, Greg said the following} — courvo

I’m planning to shoot her another email tomorrow, with some possibly general numbers but more likely with a suggestion/invitation to talk on the phone or even meet in person, as this company is very local to me.
As I study the GVAA rate sheet my thoughts are:

2)      I’m concerned with her statement that they use these 2 minute commercials for “national and international cable TV.”  If I read the GVAA guide correctly, this means that I’m looking at asking for $1500 on the low end, which would cover “Limited to one year cable TV use only.”  If international, I’d want to take a serious look at something a little more.  I don’t think I would want to ever agree to “perpetuity.”

3)      Similarly, I see the internet guidelines and would also want to let her know that I’d really have to get an understanding of what a specific client wanted to do with the audio.

4)      Question:  I thought I heard at least one person say somewhere recently that it isn’t a bad idea to refer them to the GVAA guide.  True?  Is this a document that we ought to be sharing with potential clients?  Is this helpful as I try to explain that there is an “industry standard” developing?  Do I give anything away by letting them look at this?

My approach, I think, will be to agree to $400 but to ask her if she has anything specific in mind at this time.  If so, I would likely price projects on a case-by-case basis and write up a quote based on their proposed usage.

At the same time, I’m hesitant at this juncture to lob the number $1500 or any other cluster of numbers at her, because I fear scaring her off or confusing her.  I’m thinking best to accept $400 as a starting point and invite her to toss me a gig, at which point I’d get deeper into the weeds with her in person and only then begin to educate her on what I felt was a fair rate structure.

[my response:  Here’s the flip-side of settling (?) for the $400, and then negotiating higher:  Once they have you at that number, the learning curve to a bigger number is harder, ’cause you have to convince them what’s different to justify the higher compensation.  Always harder to negotiate UP.

Having said that, starting out with a number you find bearable, and starting a RELATIONSHIP certainly has its merits, and is at the heart of all fair negotiations.  I like the idea of the face-to-face meeting if you can arrange it.] –courvo

The latest:
After some thought and writing/editing, I decided to respond to her with this:

For a 2 minute spot, I would charge a session fee of $500.  This includes consulting with you on your specifications on the written copy (pronunciation, tone, cadence, special instructions, etc.), and recording, editing, formatting and sending the audio file to you in a timely fashion.  I re-record and resend at no additional cost if there are any mistakes in my initial performance.
I can also enable a phone patch for you to direct me remotely, if desired.  Alternately, since you are local to me I could also come to your facility to do the session if that’s preferable.
In addition to a session fee, I do also negotiate a fee for usage.  Since this is more of a general overview, I’m hesitant to get into specific numbers, as the fee depends on where the recording is used and for how long.  For national or international cable TV, I’d ask for a buyout of one year.  For internet, it helps to get a very specific understanding of where your client wants the audio to reside (company websites, social media, etc.) and whether you anticipate scenarios where there could be a substantial number of views (tens or hundreds of thousands), such as on YouTube.
My rates are calculated based upon data from established, leading sources in the voiceover industry, and they reflect the current industry standard.  If you’re interested in diving deeper into this process, I’m happy to offer more details.
Do you have a specific project in mind?
My main interest frankly is not any one project, but in building a great ongoing business relationship and delivering quality service for you over time.
May we discuss further?
Her response:

Hi Greg,
Thanks for the information.  We’ll keep you in mind if we have a project with a bigger budget.

So, not an immediate win, I suppose.  Also, while the cynic in me is tempted to see this as a brush-off, she didn’t outright reject me — seems that I’ve isolated her main issue:  budget not big enough.

I feel reasonably confident I addressed this as best I could and tried to strike a nice tone.  Do you see anything I should have done differently?  I thought about calling her first, but felt that perhaps laying out a few parameters in writing might be a good start before talking in person.  Any way to realistically further engage a client who says “we don’t have that in our budget?”  I wonder if my discussion of usage fees may make others back away in the future?  (Not that I’m going to stop talking usage, though)

My response:  Greg… I think you did everything about right.  You can waffle over whether you should’ve made the phone call, but some people don’t prefer that, so it’s a coin toss.  (I asked him again if he would mind that I shared his story on my blog)

His answer: I’ve got nothing to hide or be ashamed of if potential VO consumers are reading this too – I’m just trying like the rest of us to advocate for fair rates and practices.  If my story helps to add to the discussion, then that’s good.
Another observation:  I know this was just one single potential client, but I suppose this raises the important issue of how to address the objection “What you’re asking for is just not in our budget.”  I’ve got lots of thoughts on this, but I’ll bet this would make for an interesting discussion among fellow VOers.

Thanks Greg for being persistent and doing the right thing, and especially for being having the chutzpah to let me share your story.