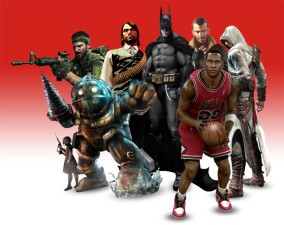 This is a side of voice-acting I haven’t tried for.  Should I?  I know Brad Venable and DB Cooper (and many others) thrive on the work they find in video games.  It’s not like I wouldn’t want to…it’s just that like launching into ANY new genre, I don’t know where to start…where to find the job leads, the coaching.

Today’s blog answers some of that.  It’s from guest writer Amanda Clarke of Gloc Media, a UK-based digital marketing firm.

I’ve accepted one or two other articles from Gloc.  This one seemed perfect, ’cause I don’t have the chops to write something this erudite about video game voice-acting. 🙂

The progression and evolution of video games over the past couple decades has been staggering. Depth and intricacy of graphics are at an unprecedented level, the expanse of in-game worlds have increased to unimaginable sizes and the culture has shifted from the niche into an accepted mainstream commodity. More so, the latter now grants an enormous increase to the video game market’s capital. As other media forms and industries are feeling the brunt of illegal downloading and sharing, the video game market continues to increase year after year, with no sign of stopping. With this being the case, voiceover actors (formerly with a background in radio or television) are utilizing the rising opportunities found within this entertainment medium.

To move into the video game sector, actors need to carry over a lot of their previously attained voicing skills, knowledge and experience, as well as learn and employ a wealth of new techniques. Many who have attempted to integrate with the video game market have found it too demanding due to a multitude of reasons. This is not an area for the faint hearted, but if tackled head on with commitment and ambition, this industry can open up many doors.

Very often, video game dialogue spans an incredible breadth of emotions. Most actors are not given the dialogue until they attend the recording session, so being able to bring forth many diverse vocal styles immediately is a large part of this gig. Additionally, producers are found to frequently ask that the actor voice a number of different in-game characters.

Video game scripts are usually loaded with high octane, loud phrases and passages. Many actors find a lot of their recording time dedicated to shouting and screaming. Action words such as ‘Jump!’ and ‘Shoot!’, or phrases like ‘He’s been hit!’ and ‘Watch out!’, can be draining on the vocal chords over a long period of time. It is not uncommon for a voiceover actor to be expected to deliver dialogues from anywhere between two to four hours at a time. The result of the intensity of voiceover for video games is that it can become an endurance race. With this in mind, many voice actors will book video game jobs later in the week so that they have the weekend to rejuvenate their voice and throat.

Despite these possible obstacles, it is not all doom and gloom in the video game world. In similar fashion to overdubbing motion picture and animation, voiceover recording for video games is generally undertaken solely by one actor at a time in a studio booth. Usually the structure for the recording process resembles that of pre-lay animation. This style of work is extremely beneficial for voiceover actors as they needn’t be concerned with fitting their voice exactly to the onscreen facial actions and expressions. However, this can sometimes not be the case. Video games are an international market and with that comes translation and re-dubbing for foreign languages. Nonetheless, voice actors shouldn’t be too troubled by this element as many companies employ a voice over agency to complete the universal transfer.

Aside from technical ability, it is of great help if you withhold a strong imagination. Taking the words from paper to screen with little to no media accompaniment is a daunting endeavour.

Picturing sets and frames in your mind can truly accentuate your vocal deliverance, and thus increase your performance and take exponentially. Additionally, a director will regularly convey exactly what it is they want from a take. It is not unusual to be asked for 2 or 3 takes of the same line, but at altered volumes and styles. This is due to the project’s team allowing for potential changes in the on screen footage.

Working within the video game industry as a voiceover actor an be extremely tasking and exhausting. Nonetheless, those that have entered it with aspiration and enthusiasm have seen large rewards come of their efforts. Many take the view that having been involved in this industry has heightened their skill set and professionalism immensely, making the demands of other media forms appear easily attainable in comparison.